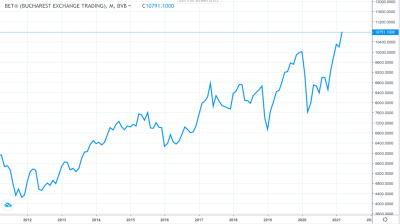 The Bucharest Stock Exchange (BVB) announced that on March 16 it was the first exchange in the region to beat its records established before the 2008-2009 crisis.

BET, the blue-chip index of the BVB, closed the March 16 trading session at the level of 10,844 points, thus reaching a new historical maximum. The previous record set by BET at the close of a trading session was on July 24, 2007, before the outbreak of the 2008-2009 financial crisis, which affected all markets.

The performance has, however, rather a symbolic value since technically it can be argued that corrected for the exchange rate, inflation or under any other methodology, the index still lags behind 2007 levels.

On the other hand, the BVB has greatly developed over the past 13 years, more than the BET dynamics can reflect: the BVB held its first session as an emerging market on September 21, 2020, when the first two Romanian companies were included in the FTSE Global Equity Index Series (GEIS).

Furthermore, the capitalisation of the equity market at BVB surged from less than €35bn in 2007 to €36bn currently.

The BVB indices are in full swing these days. Since the beginning of this year, BET is up by 10.6%, putting the 12-month gain at an impressive 52.2%.

"This new historical maximum is a confirmation of the fact that we are on the right path in the development of the Romanian capital market. The premises to accelerate the development are created, they only need to be used by market participants. We continue our efforts to improve the liquidity of the entire market," said Adrian Tanase, BVB CEO.