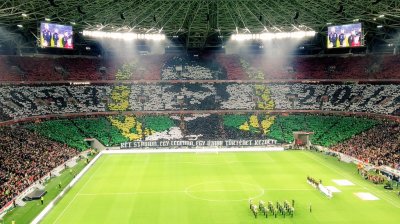 Uruguay beat Hungary 2-1 in a friendly game on November 15 in front of 68,000 fans during a friendly game at the inauguration of new Puskas Ferenc Arena, named after the legendary footballer.

Hungary’s biggest sports infrastructure investment in recent times - amounting to HUF150bn (€450mn) in 2.5 years - was made after the old stadium was torn down in 2015, according to official reports. The state-funded, UEFA category 4 stadium that can seat close to 68,000 people, was completed on time and on budget, the government's commissioner for investments in the capital said on Friday before the match.

Balazs Furjes said the project had employed 15,000 people during the past 2.5 years without involving any foreign partners. He said costs were average by international standards as similar stadiums in Europe were built at a per seat cost of HUF1.2mn-3.1mn. However, the cost of the Puskas Arena was much higher than that, costing 2.1mn per seat.

Initially, officials calculated a HUF35bn cost, which was raised to HUF100bn in 2015. In 2017 former cabinet chief Janos Lazar said that the cost of the stadium would rise to HUF190bn, which is over 100% of the original cost estimates and is far more expensive than similarly-sized stadiums in Europe such as Allianz Arena in Munich or Arsenal's Emirates Stadium.

Viktor Orban's obsession with the sport is legendary. His first trip abroad as prime minister in 1998 was to the World Cup final in Paris; according to inside sources, he has not missed a World Cup or Champions League final since. In his home village Felcsut with a population of 1,700, a stadium with a capacity of 3,500 was built next to his house.

Over the last eight years, the government spent hundreds of billions of forint on upgrading or building new stadiums, even in small towns with a second and third division team.

In 2011, parliament approved legislation to allow companies to sponsor sports clubs directly through tax deductions, commonly known as the TAO-scheme. In the last eight years, the budget’s shortfall from the TAO-scheme reached HUF500bn. Not surprisingly, the football academy operating in Felcsut has been a major beneficiary of the programme, receiving tens of billions of forints of corporate money.

Critics say reckless spending on sport infrastructure is draining money away from the health sector and education. A number of the facilities were built in small, provincial towns, which have trouble operating them. Another objection is that construction cost almost always exceed targets. Projects are won by companies with good government contacts.

Before the game, Orban has posted a promotional video that follows the path of a football as it is kicked, headed and chested by ordinary people around various locations in Budapest before it lands in the new Puskas Arena.

Public figures including Hungarian Football Association chairman Sandor Csanyi and Justice Minister Judit Varga were also featured in the epic clip. Of course Orban was no exception. He is seen kicking the ball from his residency in the Castle District.

Tickets for the match on Friday sold out within days after they were made available, first to official fans, then to the general public. Puskas Arena is scheduled to host four UEFA EURO 2020 matches. They include Group F matches on June 16, 20 and 24, and a round of 16 match on June 28.

Hungary's qualification will hinge on a decisive game against Wales on Tuesday.