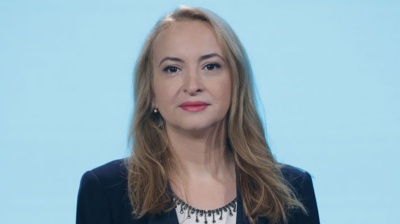 World chess champion Antoaneta Stefanova is There Are Such People's nominee for prime minister, but she won't accept the mandate to form a government.
By Denitsa Koseva in Sofia April 26, 2021

Bulgaria moved closer to a new snap general election on April 26 after the leader of the second-largest party in the new parliament, popular showman Slavi Trifonov’s There Are Such People, announced that his party will immediately return the mandate to form a government from President Rumen Radev.

The options for forming a government after the April 4 general election are narrowing as outgoing Prime Minister Boyko Borissov’s Gerb party also forced to return the mandate as no party was willing to enter in coalition talks with it.

Trifonov finally broke the silence he has maintained since the election, saying his party’s nomination for prime minister will not accept the mandate.

“Our proposal for a prime minister is the world chess champion Antoaneta Stefanova. She has an economic education and speaks five languages. I leave to you the comparisons, thoughts and conclusions. Of course, Antoaneta Stefanova will return the mandate immediately," Trifonov wrote on Facebook.

He has not spoken publicly since the April 4 general election, claiming he had gone into self-isolation due to coronavirus (COVID-19). His quarantine was supposed to end two weeks after he was diagnosed but Trifonov still has not talked to journalists.

“There Are Such People does not have the necessary number of MPs and partners to form a government. A stable government. The proposed support is from political entities, which are harmful, greedy and proven to be compromised. And this is not a support they offer, but dependence,” Trifonov explained.

Radev has said he will not hurry to give the mandate to Trifonov’s party in order to give the parliament more time to adopt urgent legislation changes and to discuss possible compromises. He has not yet announced the date he will give the mandate to There Are Such People. However, as Stefanova will return it on the same date, the president will have pick a third political party to attempt to form a government.

According to the constitution, Radev can pick any of the remaining political parties and is not obliged to choose the third-largest. However, he has few options as the other two newcomers in parliament – the reformist Democratic Bulgaria and the Stand up! Thugs out! party – have said they do not believe they should be given a mandate due to their low number of MPs.

This leaves two parties that have not said anything clear about their willingness to try to form a majority – the Bulgarian Socialist Party (BSP), which came third in the April 4 vote, and the fourth-placed ethnic-Turk Movement for Rights and Freedoms (DPS).

Considering that the BSP has said it will back Radev’s candidacy for a second term, it is widely expected that he would pick this party for the third mandate.

“As I have forecasted, There Are Such People will return the mandate. There is a minimal chance of forming a government with the mandate of Democratic Bulgaria. But would the president risk alienating the BSP from himself just before the presidential election in the autumn? Today the likelihood of an early vote has sharply risen,” prominent political analyst Petar Cholakov commented on Facebook.

“I am certain that there will be questions why we do not unite to guarantee a government now. We are putting efforts in this. But the ball is not in our hands,” Vladislav Panev, one of the leaders of the Green Movement, which is member of Democratic Bulgaria, commented on Facebook.

He also said that the chances for an early election are “enormous”, therefore the parliament should focus on adopting the most urgent legislation changes in the coming two to three weeks. Moreover, Panev said there was nothing bad in having an interim government for three months, although a reformist government would be better.

“We can hardly influence on that process. The important thing is the election in July to change Bulgaria sustainably. It is clear that there are risks (return of “patriots”, revanche of the angry Borissov) but we shall make an effort to prevent those,” Panev wrote.

Meanwhile, Hristo Ivanov, one of the leaders of Democratic Bulgaria, said the formation will comment on Trifonov’s decision on April 27 after a meeting of its leadership. The formation has said it was ready to back a government formed by There Are Such People.

Borissov did not miss the chance to criticise Trifonov for both his choice of candidate for prime minister and the decision to return the mandate without attempting to form a government.

“My respects to the chess champion, but this is a sport called ruling and politics. In my opinion, the ruling party should nominate its prime minister,” Borissov said in yet another video live broadcast on his Facebook profile from his home.

Critics of the outgoing prime minister noted that he also chose not to personally Gerb’s mandate receive, and said he has no right to criticise Trifonov for choosing to do the same.

Borissov also said that early elections would not change the current result and would only waste time and money. He once again offered help to Trifonov.

“Because the people are dearer to us than anything, we once again are giving them help they did not ask for,” Borissov said.

He also accused Trifonov of being a coward after refusing to rule “with 165 MPs”, referring to the support offered to the party by the BSP and DPS as well as Gerb. Supporters of the showman have said his decision was the only right choice as the party said before the vote it would never enter in coalition with any of the traditional parties.

Kyrgyzstan hits Canadian gold mine operator with $3.1bn fine and unveils law on state takeovers of companies
4 hours ago
ECHR deals big blow to Polish government-dominated top court
15 hours ago
Germany deal to buy Sputnik V dead, but India to receive 360mn doses
15 hours ago
Lukashenko signs decree on the transfer of power in the event of his death
15 hours ago
Amnesty International restores Navalny’s Prisoner of Conscience status
23 hours ago