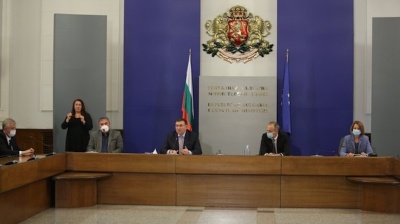 Bulgaria’s government decided to impose a three-week lockdown, closing all malls, schools, kindergartens, restaurants, bars, night clubs and sports and recreation facilities as of November 28 to slow down the spread of coronavirus (COVID-19) as its health system is already struggling to deal with the disease, Health Minister Kostadin Angelov said on November 25 at a press conference live broadcasted by Dnevnik news outlet.

The decision comes after weeks of high numbers of new cases and after Bulgaria topped the ranking of number of deaths from coronavirus in Europe as a share of its population. However, it was seen by many as taken too late with few expecting that the lockdown will lower the spread of the virus at this stage.

Meanwhile, the government also extended the extraordinary epidemic situation by two months until the end of January.

While the government was announcing the new measures, dozens of supporters of the far-right Vazrazhdane party gathered to protest against the lockdown, clashing with the police. The protest ended quickly without any injuries.

Prime Minister Boyko Borissov called on people to respect the measures to help the heath system deal with the situation.

Borissov also said that on December 21 schools, kindergartens and closed stores will be opened ahead of Christmas holidays.