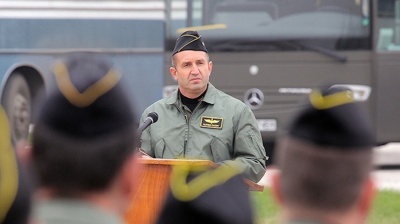 Bulgarians have turned against Russia and its President Vladimir Putin since the invasion of nearby Ukraine, but politicians remain conflicted in what was for many years one of the EU’s most pro-Russian states.

As Russia’s war in Ukraine enters its second month, Bulgaria’s president and government appear torn between pro-Western and pro-Russian aspirations, and as a result have failed to provide any serious support for Ukraine.

Pre-war, approval for Putin among the Bulgarian population hovered around 60%, but recent polls show that the approval of the Russian president has collapsed to just 16% in the weeks after Russia invaded Ukraine. Around 80% of Bulgarian disapprove of the war.

As well as fears that the conflict may spread further west, ordinary Bulgarians are learning of the horrors of war from the refugees that have fled to their country. Thousands of volunteers are helping refugees in any way they can, including transporting humanitarian aid to the war zone and people away from there. On March 24, tens of thousands of people marched in support of Ukraine and gathered at a concert against the war.

This isn’t reflected in the actions and statements from Bulgaria’s top politicians, notably President Rumen Radev. Formerly believed to have freed himself from Moscow’s influence and to be standing in the pro-Western camp, Radev has exhibited rather pro-Russian behaviour in the past weeks, raising criticism and suspicions he is indeed loyal to Moscow.

Radev has repeatedly said the government should not allow Nato battalions to guard the country, which is part of the eastern flank of the alliance and is important as it has a border in the Black Sea, which also numbers Russia and Ukraine among its littoral states. He has said that Bulgarian army is capable of safeguarding both the land and the air.

In recent days, Radev went even further, saying that the government must find a way to repair the army’s MiG-29 jets, preferably in Russia as they were produced there — inevitably raising the question of why Russia would repair military jets belonging to a Nato member. The former air force commander subsequently added that if Russia is not an option, the government must seek help to repair the MiG-29s from another country and then announced that Poland would be willing to help.

He made a similar reversal after Bulgaria’s recently sacked defence minister Stefan Yanev was heavily criticised for sticking to Moscow’s line that Russian action in Ukraine is not a war but a “special operation”. Yanev also insisted that Bulgaria does not need additional Nato troops. This caused Bulgarians to turn against Yanev, previously the popular head of Bulgaria’s 2021 interim governments, and eventually cost him his job. Radev was cautious initially and did not take a position against Yanev, only changing his mind after his dismissal and saying he was not suited to the post.

Bulgaria-watchers can point to previous red flags concerning Radev’s position towards Russia. In the final debate of the autumn presidential race, Radev said that Crimea — the Ukrainian region illegally annexed by Russia in 2014 — was Russian. This provoked a strong reaction from the US and Radev was forced to explain that he meant that Russia controls Crimea in practice but that this was not legal.

Even when formally supporting Nato’s decisions, Radev remains not fully committed. On March 24, he commented that the decision of the alliance to strengthen its eastern flank was a positive move, but at the same time remained firm that the country cannot supply military equipment to Ukraine as Bulgaria needs to acquire more equipment for itself.

Bulgaria’s Prime Minister Kiril Petkov, by contrast, has positioned himself as a pro-Western politician with clear pro-EU and Nato positions. However, he is a hostage of the divergent positions within his four-party ruling coalition, where the pro-Russian Bulgarian Socialist Party is blocking any chance of a firm response to the war.

The BSP, along with the opposition far-right pro-Russian Vazrazhdane party, voted against a resolution condemning the Russian war in Ukraine. The two formations objected to part of the text that said Bulgaria would join all sanctions imposed by the EU and Nato. The BSP is also against any attempt by Petkov to send ammunition or other defence equipment to Ukraine, claiming that this would mean the country is taking sides and thus participating in the war, which would endanger peace in Bulgaria.

The BSP is the successor of the Bulgarian Communist Party and has remained pro-Russian over the years. Its former leader, Sergey Stanishev, attempted to modernise the party, but without changing its orientation towards Moscow. Until recently, this found favour with Bulgarians who considered Russia a friendly state before the war.

On the other hand, Nato is putting serious pressure on Petkov to make Bulgaria a more active participant in the alliance’s plans to strengthen its eastern flank and to secure military aid to Kyiv. The country has several MiG-29 fighter jets it could provide to the Ukrainian army and there were even rumours that Petkov had agreed to that. However, even if he has indeed given his consent, he was quickly stopped by his coalition partner.

Meanwhile, one of Petkov’s other coalition partners, Democratic Bulgaria, is pushing for more help to Ukraine and more sanctions on Russia.

It is hard to predict how damaging the divisions within the coalition over Russia will be at this point. Petkov has no winning moves — if he chooses to abandon the BSP, the only remaining potential partners are former prime minister Boyko Borissov’s Gerb or the Movement for Rights and Freedoms (DPS), neither of them acceptable to Petkov’s other partners. So far, he seems determined to somehow manage to balance the various interests within the coalition, which remains united on its other important priorities, including the reform of the judiciary.

Still, the lack of decisiveness in government’s actions towards Russia and Ukraine has disappointed many pro-Western voters who are keen to help Kyiv win this war as soon as possible, and Petkov’s popularity rating has already started to fall slightly amid the war and the economic crisis it has caused.