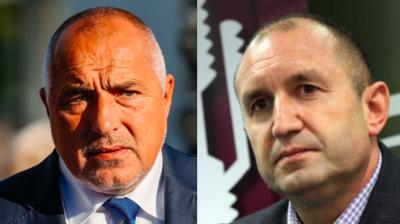 Bulgaria’s President Rumen Radev has strongly criticised the government over its failure to end the impunity of the country’s chief prosecutor, provoking a war of words with Prime Minister Boyko Borissov.

Bulgaria’s two top politicians have had a tense relationship ever since the election of Radev, backed by the opposition Bulgarian Socialist Party (BSP), who beat the candidate of Borissov’s Gerb party in the 2017 presidential election. Radev, Bulgaria’s former air force commander, has vetoed many of Gerb’s legislative changes since his election, and has openly criticised the government’s politics.

The latest dispute erupted over the recent controversial election of Bulgaria’s new chief prosecutor, despite protests, objections by legal bodies and civil society, and Radev’s initial refusal to sign the appointment.

Borissov’s government has now put forward proposals for judicial reforms, changes to the procedure to elect chief prosecutors and a plan to create the post of “independent prosecutor” to oversee the chief prosecutor.

However, earlier in December, the Council of Europe’s body of constitutional experts, the Venice Commission, said that Bulgaria’s attempt to resolve a serious flaw in its legislation that makes the position of chief prosecutor untouchable will fail to achieve its goals.

The Committee of Ministers of the Council of Europe also criticised the proposed amendments, saying in a resolution they were not sufficiently concrete. It also noted that the draft bill on the investigation of the chief prosecutor and the presidents of the Supreme Court of Cassation and the Supreme Administrative Court “not only fails to resolve the current shortcomings relating to the independence and effectiveness of investigation concerning a chief prosecutor, but could make such an investigation more difficult to initiate”.

Radev has now added his voice to critics of the proposals, and announced that he will initiate constitutional changes. The president claimed that in Bulgaria there exists “parallel power” that must be liquidated and said he will use his right to initiate constitutional changes after consulting with his legal team. He has not elaborated on the changes but they are believed to concern the status of the chief prosecutor.

Radev was speaking in interview with bTV in which he commented on various issues, including Bulgaria’s credit rating which was recently improved by S&P, the government’s falling debt, the judiciary and the army’s modernisation. All these have been pointed out by Borissov as huge success for his government, but Radev contested this.

“When the government spends billions of artificial surpluses in the dark, when there is widespread corruption, we need to reassess the place of the Bulgarian institutions for overcoming of the erosion of statehood and for neutralisation of the parallel power,” Radev said.

He added that Borissov has decided to initiate changes that would make the chief prosecutor accountable “in the sunset of his rule”, suggesting that Gerb would not win another election.

Radev’s criticism provoked an angry response from Borissov who said, as quoted by Dnevnik news outlet, that the president is jealous of him and claimed that while head of Bulgaria’s air force, Radev did not carry out his duties well.

“I did not like him as a chief of the air force. Planes and helicopters were falling from the sky as a consequence of his work. Then Anyu Angelov [former defence minister in Borissov’s first government] came to beg me not to sanction him and we did not do it,” Borissov said.

“To speak with such hatred for only one party and one person out of fear or envy is beyond the dignity of the presidential institution,” Borissov also said.

The comments are perplexing as, according to Dnevnik, no plane or helicopter crashed while Radev was head of the air force.

However, Borissov went on to say that Radev is jealous of him because the president has “never been invited to sit next to the fireplace in the White House” — a reference to his own recent meeting with US President Donald Trump.

Meanwhile, Gerb’s parliamentary group issued a declaration stating that the political sunset of a party is defined by voters and that the party can run the country for three more mandates.