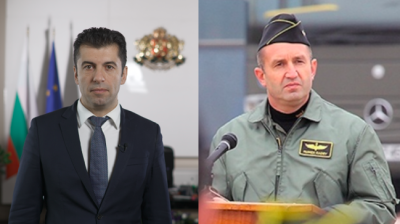 As Bulgaria prepares to vote on providing military aid to Ukraine, its government and president hold opposite positions and are in open conflict.

Such a row between President Rumen Radev and the government of Prime Minister Kiril Petkov would have been highly unlikely before the war. Before becoming prime minister, Petkov gained popularity after being appointed as caretaker economy minister by the president and has many times said that Radev was his hero.

Until the start of the Russian war in Ukraine, Radev and Petkov’s government had very good relations and many said the cabinet was strongly influenced by the president. Radev gained popularity in the summer of 2020 when he backed the demands made at mass anti-corruption protests. The following autumn, Petkov’s government came to power, promising a tough line on corruption.

However, the war drew a clear line in Bulgarian political life, with Radev positioning himself firmly on the side of Moscow, which disappointed many of his voters. Claiming that he wants to preserve the peace, Radev fiercely opposes the government’s intention to finally approve military aid to Ukraine.

“In these times of challenges, it is our human duty to help the victims of the war. … But it is our patriotic duty not to allow the homeland to be involved in the war. We should not the passions of war to be transferred to us. We should not tolerate political charlatans inciting them for their own use,” Radev said on May 1.

He went even further, accusing the government of betraying the Bulgarian interest by refusing to pay for Russian gas in roubles, which led to Gazprom’s decision to stop deliveries. He suggested that the government serves someone else’s interests (though it’s not clear whose).

“The government owes a categorical answer to citizens who trusted it on whose interests it serves – theirs or someone else’s. It is about time for the government to give clear evidence that it realises and defends Bulgarian sovereignty and is being led by the Bulgarian national interest in its policy,” Radev said.

The president also said he thinks that Petkov’s recent visit to Kyiv was unnecessary, saying that the country must have its own policy that is not influenced by anyone else.

“Bulgaria’s sovereign position is being drafted in Sofia, not in Kyiv,” Radev said.

His attacks, with similar words, were repeated by former prime minister Boyko Borissov, leader of the Gerb party, who until recently was Radev’s fiercest opponent. That triggered speculation that the two politicians are serving Russian interests and that the attacks were coordinated and ordered by Moscow, though Gerb’s position is ambiguous.

Gazprom’s decision to halt supplies to Bulgaria and Radev’s response led to a firming of the pro-western and pro-Ukrainian positions of Petkov’s Change Continues.

Assen Vassilev, deputy prime minister and co-leader of Change Continues, was the first member of the party to stand firm against Radev’s no-help position.

This statement was widely welcomed by pro-western citizens and was seen as an act of independence by Petkov and Vassilev from Radev, who was until recently seen as the father of their political project and government.

However, analysts are cautious in their optimism and think that the two politicians are yet to prove their words with actions.

Bulgaria’s parliament will vote on providing military aid to Ukraine on May 4. One of Change Continues’ coalition partners – the pro-Russian Bulgarian Socialist Party (BSP) – has repeatedly said that it will leave the coalition if such a decision is approved. Without the votes of BSP’s MPs, the ruling coalition must rely on support from the opposition.

Despite its criticism of Petkov’s government, Gerb has already insisted on adoption of a decision on military aid to Ukraine. So did the Movement for Rights and Freedoms (DPS). However, it is not yet clear whether the two parties will indeed back the government.

Meanwhile, the BSP’s leader and current economy minister Kornelia Ninova gave a few signals the party might back off from its firm position. Petkov has said he does not believe that Ninova will quit the coalition. Analysts also widely believe that such a move is highly unlikely as it would cost BSP its last chance to be in power.

While the BSP is struggling to retain the support of its pro-Russian voters, which according to latest polls are no more than 15% of the population, two other political players preparing to fight for the same voters. Former caretaker prime minister and minister of defence Stefan Yanev, who was fired by Petkov due to his openly pro-Russian position since the start of the war, said he will set up a new party, Bulgarian Rise, which he said will fight to defend Bulgaria’s dignity.

Yanev, who was twice appointed prime minister by Radev, was previously the president’s advisor. He became notorious after insisting that the word ‘war’ must not be used for the conflict in Ukraine as Russia’s President Vladimir Putin was calling the invasion a ‘special operation’. Yanev claimed the word ‘war’ had not been used in any Nato or EU document either.

Maya Manolova, former member of the BSP, former ombudsman and also former leader of a civic anti-corruption project, is also setting up a political party. Her project will be aimed at the BSP’s voters and will focus on social issues. However, Manolova is also seen as pro-Russian and, if given the opportunity, is expected to enter a pro-Russian coalition in the future.