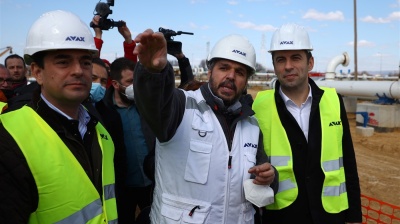 Bulgaria expects to complete the gas link with Greece by the end of June, aiming to end its energy dependence on Russia, Prime Minister Kiril Petkov said on March 21.

The completion of the Greece-Bulgaria interconnector has been delayed for years by Sofia but Petkov's government is keen to complete it as soon as possible.

The €220mn gas link was supposed to be ready by the end of 2020 but was delayed at the time of the former government of Boyko Borissov due to administrative issues.

“At the end of June the Greece-Bulgaria link will become a fact. As of September, Azeri gas can run through it,” Petkov said in a statement.

The government intends not to renew its contract with Russian Gazprom in 2023. The current contract expires at the end of 2022.

The 180km gas link that has an annual capacity of 3bn cubic metres is being built by a joint venture of Bulgaria's state energy company BEH and Greece's gas utility DEPA and Italy's Edison (EDNn.MI).

Bulgaria has said that will not hold talks with Gazprom to renew its gas purchase deal and will be looking at alternative supplies. According to Ivan Topchijski, the chairman of the board of directors of state-owned gas supplier Bulgargaz, the country could cover all its energy consumption needs without importing Russian gas once its current contract with Gazprom expires at the end of 2022.

Topchijski said that the authorities plan to purchase all available gas volumes under an agreement with Azerbaijan after June 30, including by using alternative networks in case that the completion of the Greece-Bulgaria interconnector is delayed again.

Bulgargaz also plans to import liquefied natural gas from several sources so that it can further diversify the energy supply. Bulgaria can use two liquefied gas terminals in Greece and five in Turkey.