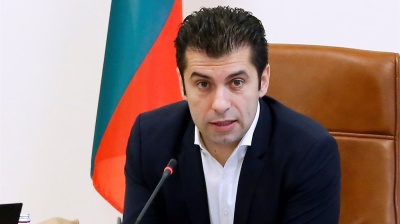 MPs from There Are Such People (ITN) party, led by Bulgarian showman Slavi Trifonov and Sports Minister Radostin Vassilev, are leaving the party and, although they have not explicitly said it, are expected to back Prime Minister Kiril Petkov and the ruling coalition.

If this happens, Petkov’s government will get a step closer to the required majority of 121 MPs, after ITN pulled out of the ruling coalition last week.

The news was announced by Vassilev and the five MPs at a press conference on June 13 broadcasted by Mediapool news outlet.

Meanwhile, Vassilev and the three other ministers from the ITN quota – Minister of Foreign Affairs Teodora Genchovska, Minster of Regional Development Grozdan Karadzhov and Energy Minster Aleksandar Nikolov – resigned as ordered by the party’s leader.

If Vassilev remains part of the government, the ruling coalition will still need six or seven more MPs for a majority in parliament. Local media reported that Petkov will also try to persuade Nikolov to keep his post at the energy ministry.

The rift between ITN and the government came a week ago when Trifonov said he was pulling out the ministers from his quota and the party from the four-party ruling coalition. He then accused Petkov of intending to lift the veto on the start of EU membership talks with North Macedonia behind the backs of his coalition partners.

On the other hand, Petkov accused ITN of attempting to put pressure on him and Finance Minister Assen Vassilev, demanding an additional BGN3.9bn (€2bn) to be provided to the regional development ministry under the budget revision adopted by the government last week. Petkov said the money was intended to be provided to construction companies that are involved in embezzlement of hundreds of millions paid by the previous government of Boyko Borissov for road construction.

In the following days, the two sides were involved in heated disputes, accusing each other of corruption and connections to the mafia.

Petkov said that he and fellow Change Continues co-founder Assen Vassilev intend to talk to each MP in parliament who seems willing to work for the interest of Bulgaria, and not of their party’s leaders, and persuade them to back the government for key reforms.

During the press conference, Radostin Vassilev said that 20 out of 25 ITN MPs were unhappy with the party’s leadership but that those announcing their decision to quit now were those with the most courage. He added that he expects more to follow.

The sports minister also confirmed Petkov’s accusations that ITN is pulling out from the coalition because it was refused money for road construction companies. He said that the party was “taken over by the mafia” and accused Trifonov of having close relations with businessmen related to former ruling party Gerb.

Radostin Vassilev also said that other people “hiding behind the curtains” give orders to Trifonov.

At a separate press conference, Petkov and Assen Vassilev welcomed the decision of the MPs to leave ITN.

“The mafia has just lost its coalition partner,” Petkov said.

Although he did not explicitly said he meant ITN, Trifonov said he will sue him, Assen Vassilev and Radostin Vassilev for accusing him and the party of being connected to the mafia.

Assen Vassilev also said that if the government fails to find enough support in parliament, an early election is a better option.

“This government should carry out the battle with the mafia. Constitutionally, this battle depends on enough support in parliament. If there is no such support, there is no point of having this government. We must go to elections,” Vassilev said.

He and Petkov said they are yet to talk to the MPs leaving ITN and will seek more support from the other party members to adopt anti-crisis measures and aid for companies and households, as well as for a reform of the anti-corruption body.