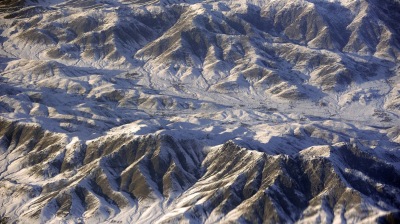 Afghanistan has a treasure of minerals in the ground worth up to $1 trillion. China will be well positioned to develop the deposits for the cash-strapped new Taliban government.
By Cameron Jones in London August 19, 2021

War-torn Afghanistan has hundreds of millions of dollars of hard-to-find lithium deposits in dusty ground. Following the Taliban sweeping to an effortless victory to take control of the country this week, its neighbours are already hungrily eyeing the resource.

Lithium has come into focus as it is a key element in the production of batteries, demand for which is expected to soar in the coming decades on the back of the electric vehicles (EV) revolution that is under way.

China is already a major home and producer of rare earth metals and potentially the business partner that the Taliban can turn to. Beijing already reached out to the Taliban leadership in July, well before the collapse of the US-backed government in Kabul, and has been one of the few great powers to have kept its embassy in the Afghan capital open in recent days. However, China's previous attempts to develop the Afghan subsoil have so far ended in failure.

The New York Times famously reported in 2010 a Pentagon assessment of the Afghanistan's mineral wealth estimating it at $1 trillion and called the country the "Saudi Arabia of lithium."

This story was based on a 1980s Soviet geological survey, itself excavated in 2004 by the Americans from the Afghan archives. Based on these materials, a US Geological Survey and then the Pentagon's group on business projects in the controlled territories conducted research and compiled a report, subsequently quoted by The New York Times.

It is possible that the lithium reserves in the soda salt marshes of Ghazni and neighbouring provinces are even larger than the reserves of Bolivia, the current world leader in lithium. In addition, huge (2.2bn tonnes) reserves of high-quality iron ores, copper (60mn tonnes), neodymium and cobalt (magnets, special alloys), niobium (supercapacitors, superconductors) and various rare earth metals have been confirmed.

Rare earth metals are in short supply with China currently controlling about 80% of global production. With the rise of the digital economy, these esoteric elements have grown in importance and are becoming a strategic resource. Securing large deposits outside of China is of major interest to global producers, making it equally important for Beijing to secure production deals with Afghanistan.

But there are many hurdles to clear before Afghanistan can start large-scale mining operations. First is the fact that the deposits of unrecovered lithium and copper are nothing more than clay brine and crushed stone making extracting the minerals technically difficult. Then there is the complete lack of infrastructure and exorbitant investment risks as well as unrestrained corruption and physical security issues due to the tribal nature of Afghan society.

Afghanistan already has some limited mining operations such as the Taliban-controlled artisanal mining of lapis lazuli, a blue semi-precious stone, which is worth $20mn per year.

In total, the Taliban earned $400mn in revenue from the exploitation of the country's resources in 2020, much more than the American-backed government produced. If professional and large-scale mining were launched in Afghanistan, the potential revenues could rise rapidly.

High on the agenda of the new Taliban government that the fundamentalists are in the process of forming will be funding. As Kabul fell on August 15 the Biden administration froze billions of dollars of Afghan government reserves held in US bank accounts on the same day, cutting the Taliban off from the former government’s money.

Strapped for cash and without any viable industry, the temptation for the Taliban is to simply concentrate on the narcotics business that generates $1bn a year in earnings from opium production and export. The Taliban explicitly addressed the issue of drugs in its first press conference with the international press on August 17 and promised to make Afghanistan a “narcotics free” country, but observers remain sceptical.

“But from now on, nobody’s going to get involved, nobody can be involved in drug smuggling. Today, when we entered Kabul, we saw a large number of our youth who were sitting under the bridges or next to the walls and they were using narcotics. This was so unfortunate. I was saddened to see these young people without any faith in the future. From now on, Afghanistan will be a narcotics-free country but it needs international assistance. The international community should help us so that we can have alternative crops. We can provide alternative crops. Then, of course, very soon, we can bring it to an end,” Taliban spokesman Zabihullah Mujahid said in the press conference in Kabul.

China has been investing heavily in the countries of Central Asia, and further afield, as part of its Belt and Road project to build a land trade and investment corridor with modern infrastructure between Asia and Europe. It is already well positioned to expand that investment into Afghanistan and hook the country up to the growing regional infrastructure, as bne IntelliNews reported in the article “As Taliban regime takes shape, Central Asia and Iran assess fate of Afghanistan investments.”

The fear of China moving into Afghanistan and taking control of its mineral resources has become a growing security concern in the past few years.

If China gains control of Afghanistan’s pristine lithium and rare earths reserves, it will be a key victory in the battle for resources with Europe and the US, which imported 80% of its rare earth metals from China in 2019, while the European Union imported 98% of its minerals from China the same year.

In addition to direct economic motives, China may also be tempted to develop mineral production in another country as the processing to produce both copper – another burgeoning metal on the market thanks to its extensive use in electric vehicles – and lithium is extremely harmful for the environment.

Moving production to a country that has never even heard of carbon credits has a lot of appeal, especially since China itself has already committed to achieving carbon neutrality in 2060.

Although China has always enjoyed relatively warm relations with previous Afghan governments, so far the entire two-decade history of Chinese projects in the country has ended in failure. Singapore-based economist Rafaello Pantucci, in a column for the Nikkei, recalls that the September 11, 2001 attacks happened as the Taliban minister of natural resources was in talks with a Chinese delegation in Kabul.

The biggest project is the Mes Aynak copper mining site, the largest investment project of Chinese state-owned companies in Afghanistan. In the noughties the expectation was that the mine could produce marketable minerals worth $350mn a year within five years, but the development of the mine has been frozen ever since. It turned out that the natural resources minister of Afghanistan demanded a bribe of $30mn from the Chinese for permission to work in an area completely controlled by the Taliban.

The last big project that Chinese foreign trade specialists in Kabul were engaged in was merely establishing an air corridor for exporting pine nuts to China.

Nazarbayev ousted from power, search for Kazakhstan’s vanished ‘Leader of the Nation’ centres on Switzerland, Russia and China

bneGREEN: NDCs need to be rapidly improved to get near 1.5°C target
Nazarbayev ousted from power, search for Kazakhstan’s vanished ‘Leader of the Nation’ centres on Switzerland, Russia and China
Mongolian traders in disarray as China’s zero-Covid policy chokes business