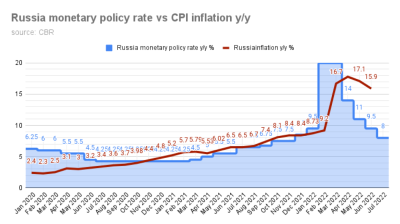 The Central Bank of Russia (CBR) continued its aggressive rate cutting cycle on July 22, slashing rates another 150bp to 8%, well below pre-war levels.

The CBR more than doubled the interest rate to 20% on February 28, a few days after Russian forces crossed the border into Ukraine, to contain the inevitable shock to the currency and to contain soaring inflation. The fast action seems to have worked, as inflation has begun to fall from its peak of 17.8% in April to 15.9% in June (chart).

As the Russian economy has stabilised the CBR has since cut the rate three times, bringing the base rate back to the pre-war level of 9.5% on June 10. Analysts believe that more cuts may be on the cards before the end of this year as a looming recession will further reduce inflationary pressures, but that the scope for big cuts is now limited as the easing cycle is close to its end in the current environment.

“We think the scope for further large cuts is now limited and we expect interest rates to end the year around 7.00%,” Capital Economics said in a note. “That brings the total amount of easing since April to 12 ppts and takes interest rates below their level of December last year. The central bank emphasised that inflation risks have continued to ease. The statement noted that “current consumer price growth rates remain low” and that “short-term disinflationary risks have grown.”

The affressive cut came in at the top of the expectations range of 25bp to 150bp, with the consensus expectations being for only a 50bp key interest rate cut. This confirms earlier speculation that the CBR’s priorities have switched from containing inflation to promoting growth.

While most of the rest of the world is battling with soaring inflation and growing stagflation concerns, Russia is the only country in Europe where inflation has already passed its peak and is now falling. The CBR revised its year-end inflation forecast lower for the second consecutive meeting, from 14-17% year on year to 12-15% y/y.

The rate cut will also help to weaken the ruble, which has become painfully strong in the wake of super earnings from raw materials and weak consumer demand. The cut was also motivated by falling inflation expectations that were running very high before the war started.

The head of the CBR, Elvira Nabiullina, at a press conference following the aggressive key rate cut said that economic conditions have turned “favourable”, with price pressures easing for nine weeks in a row. The head of the CBR sees recovery in imports, especially with consumer goods, as alternative supply channels are being developed. However, investment imports are yet to show any recovery.

Nabiullina also believes that consumption could recover as fast as after the coronavirus (COVID-19) lockdowns, when the population has sharply cut spending at first, only to restart it in the short term. “Today's savings accumulation is a compressed spring in the economy," she said.

While Nabiullina indeed said that the recession in 2022 will be milder than expected, she warned that the economic decline will be more protracted and lengthy. She also addressed the cut being more aggressive than the broad expectations and said that the “regulator was basing the decision on data available to the market” and was witnessing a “broad-based consumer price decline”.

While the analysts now see smaller room for further rate cuts, Nabiullina still believes there is further potential for them.

"There are no red lines for [key interest] rate decisions either on the upper or the lower range for us,” she said, as cited by RBC business portal. “The [key interest] rate will be chosen based on the trajectory that should ensure inflation returns to the target in 2024," Nabiullina said, referencing the 4% inflation target by 2024.

“The central bank clearly did not feel the need to slow the pace of rate cuts given the easing of inflation risks and the extent of the hit to economic activity. It maintained its guidance that it will consider the necessity of further rate cuts. That said, we think further cuts will be more gradual going forward. Russia’s 12-month ahead inflation-adjusted policy rate is now less than 3%, which is its average over 2016-19. We think the large moves in rates have probably now happened and that cuts of 100bp or lower are more likely going forward,” Capital Economics said.

Russia’s international reserves up $3.6bn in one week to $571bn
5 hours ago
CPI inflation in Moldova hits 33.6% y/y in July
18 hours ago
How do high gas prices push up the cost of power?
1 day ago
Russian inflation falls to 15.1% in July
1 day ago
Russia’s current account surplus hits new all-time high of $166bn
1 day ago