CEE monthly bond wrap: the number of issues in both CE and EE pick up in June as sentiment improves 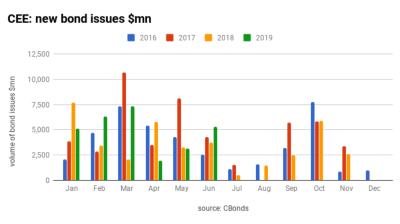 Bond issues in Central Europe picked up in June. The total of $5.3bn from seven issues in June was the most issued in the last four years. Eastern Europe and Russia also had a good month with issues of $5.1bn and $3.2bn respectively, but those volumes were still down on the bumper crop of bond issue in 2017, which remains a vintage year.

In Eastern Europe and Russia too the market is up marginally on last year with $18.1bn and $13.6bn issues in the first six months of this year, respectively, up from the $17bn and $9.5bn issued last year.

Amongst the issuers in Central Europe, there was heavy sovereign activity where the governments of Croatia, Serbia and Lithuania all issued bonds (€1.5bn, €1bn, €1.5bn respectively) with yields of between 1.125% and 1.65%. Latvia had already issued its €1bn sovereign bond in May and Slovakia did the same in April to complete the set. The Croatian bond was particularly successful, getting away on the best terms ever for the country and was 3.7-times oversubscribed.

Unusually for Eastern Europe there were some significant non-Russian issues of which a sovereign issue by the government of Ukraine to raise €1bn with a seven year bond priced at 6.75% was the largest. The bond was a big success, pricing below the 7% most analysts thought it would command and has laid the groundwork for some big Ukrainian corporate issues later this year –Ukrzaliznytsia (Ukrainian Railway) has already got a $500mn bond away in the first days of July as a result.

Amongst the other significant bonds issues in Eastern Europe was a $500mn note from steel giant Magnitogorsk Iron and Steel Works (MMK) that matures in 2024 and was priced at close to the sovereign of 4.375%.

Interestingly the smaller issuers are coming back into the market and Russian retail bank Renaissance Credit issued a €50mn bond that matures in 2024 with a 10% yield. There has been barely any wholesale funding on the international markets for Russian retail credit operations since the business blew up in 2008. Up and coming Russian broker-dealer BCS Global Markets also continues to issue a string of small bonds to fund its operations, this month placing a $10mn note that matures in 2024 with a yield of 6.25%.

June, July and August are normally dead months for Eastern Europe’s bond market and issues last year were next to nothing. However, the outlook for this year is better. Emerging market bonds are back in fashion following the US Federal Reserve bank's decision to stop rate hikes and its suggestion that it may even cut them.

Russia is particularly thirsty for bond issues as it embarks on a $32bn six-year spending spree. But underlying the need to raise investment capital is the strategy of spreading its bond holding as widely as possible as the most effective deterrent to more US sanctions.

Hungarian forint slips to all-time low against the euro

The Hungarian forint is amongst the worst-performing currencies this year, and its depreciation is forecast to continue thanks to the central bank’s dovish policies.

Russia’s industrial output grew 2.1% on the year and 8.9% on the month in December after rising 0.3% on the year in November

The expansion in December is hardly a surprise even if it fell slightly short of consensus. Poles’ robust consumer spending is driven by the good situation on the labour market, growing wages in particular.

The Watcom shopping index finished 2019 on a high note, putting in its best result in five years after under-performing for almost the whole year.