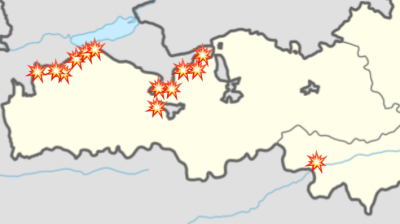 Map showing areas in Kyrgyzstan where Tajik forces took part in what some observers say amounted to an "invasion". / АбдырашитСатылганов cc-by-sa4.0
By bne IntelIiNews September 20, 2022

The armed attacks of Tajikistan on Kyrgyzstan last week brought about a “few days [that] have been some of the most violent and consequential in the independent history of Central Asia,” according to an academic, who has warned that the international media risk underplaying the significance of the events.

In a Twitter thread posted on September 19—declared as a day of mourning by Kyrgyzstan following the loss of scores of civilians and military in fighting described as “war-scale” in an article for bne IntelliNews by veteran Central Asia correspondent Bruce Pannier—Madeleine Reeves (@magdagul), a professor in the anthropology of migration, warned that “the international media should pay attention to what is happening” and described why the use of the terms “border clash” and “border skirmish” to portray Tajikistan’s attacks on Batken and Chong Alay provinces “isn't helpful”.

While armed confrontations between Tajikistan and Kyrgyzstan have not been uncommon in the three decades since the collapse of the Soviet Union, this latest conflict has been notable for the more intensive fighting and how far into Kyrgyzstan Tajik forces advanced. Tajikistan has been accused of mounting an invasion by observers including Reeves, while on September 17, Eurasianet, under the headline “Video footage appears to implicate Tajikistan”, reported that videos were “emerging that do not support the Tajik government’s minimal statements about its border war with Kyrgyzstan”.

A situation in which the world is preoccupied with the war in Ukraine and the Kremlin even appears to have withdrawn troops from its military bases in both Tajikistan and Kyrgyzstan to fight in that conflict loosens the constraints on any aggressor who wants to instigate conflict between Central Asia’s two poorest nations (Tajikistan being the poorest by a short distance).

And, in the eyes of Reeves—an academic at the School of Anthropology and Museum Ethnography at the University of Oxford and at the Centre on Migration, Policy and Society (COMPAS)—many media outlets have failed to grasp the extent of what has occurred, so have used the terms “border clash” and “border skirmish”, thus downplaying that which is critical to understanding the escalation.

Vladimir Putin has called on Dushanbe and Bishkek to de-escalate—a fragile ceasefire has been in evidence since September 18—but there are anxieties that one side or the other might be prepared to test the hypothesis that a weakened Russia would not be willing or able to control events should there be another sizeable escalation.

Firming her case, Reeves summed up: “What occurred is better described, on the evidence available to date, [as] an armed military incursion by Tajikistan. This includes attacks on infrastructure and civilian objects located at a distance from areas that are politically or juridically disputed.

“Yes, violence occurred in sites that have seen periodic escalations of violence over land, water, pasture use and access to infrastructure. Yes, there is a background of tensions between border populations dating back at least to the 1930s.

“But folding last spring’s violent events and the dramatic escalation last week into a narrative of ‘border clash’ implies that this is a straightforward or even inevitable extension of those tensions.

“It implies that the use of heavy weapons and what appear to be pre-meditated attacks on civilian infrastructure follow inevitably from local animosities. It risks leading us to look to the wrong scale, both geographically and historically, to understand episodes of violent escalation (thus claims that this is merely a ‘sub-regional dispute’ on the one hand, or ‘great game by proxy’ on the other).

“It downplays what seems to me to be critical for understanding this escalation: the importance of Tajik domestic politics and familial succession, intra-elite conflicts, authoritarian rule + stifling of civil society, together with domestic ec. crisis.

“In particular, it bypasses the critical questions of who authorised what use of force when, and why, and what was the role of so-called “chernye” without military uniform or identification equipped, as widely circulating videos suggest, with grenade launchers and mortars.

“And it ignores the wider pol. context, notably the tendency over the last decade+ to militarise border regions while simultaneously failing to make the diplomatic, legal + technical steps to delimit, or addressing the existential concerns of border populations.”

Describing the hostilities as a “border skirmish” is “deeply patronising to characterise armed aggression in which dozens have died, hundreds have lost their homes and businesses, and tens of thousands displaced”, continued Reeves, adding: “Language matters. It shapes how we frame conflict, how we link past and present, how we evaluate different causal factors, and which questions we ask.”

The evidence to date, said the professor, suggested systematic and targeted destruction of homes and businesses by Tajik forces, attacks on critical infrastructure using heavy weapons and apparently intentional targeting of schools and kindergartens.

“I write "evidence to date" noting that the media landscape in Tajikistan and Kyrgyzstan, like the political landscape, is radically unequal. There is an urgent need for an independent enquiry,” she added.

“My concern,” Reeves concluded, “is that this military aggression will mark a ‘point of no return’ for those from affected villages, creating conditions where life after evacuation is no longer imagined to be viable, especially for those with kids. Thus a de facto exodus.

“I hope I’m wrong, but that’s what I’m hearing with friends who have fled from villages where homes have been destroyed – кележегибиз жок – “no future here for us”.”