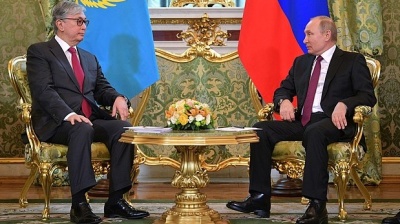 Analysts remain uncertain how strained the relationship between Tokayev and Putin might be. / bne IntelliNews
By Bruce Pannier in Prague September 2, 2022

Kazakh President Kassym-Jomart Tokayev on September 1 delivered a national address in front of a joint session of parliament, ending with a surprise announcement of a snap presidential election to take place this autumn, and his less surprising intention to run for re-election.

The announcement was a surprise because so far in 2022, Tokayev has not enjoyed a good year as Kazakhstan’s president.

The biggest protests in post-Soviet Kazakhstan’s 30-year history erupted in the first days of January and there was an attempted coup against Tokayev during the bloody mayhem. Kazakh-Russian relations, meanwhile, have reached an all-time low since Russia in late February launched its war on Ukraine, and Kazakhstan, which shares a 7,000-kilometre border with Russia, feels keenly the economic spillover from international sanctions imposed on its giant neighbour, also a leading trade partner, for the war on Ukraine.

Kazakhstan has never conducted a parliamentary or presidential election according to schedule, so there was ample precedent for calling for a snap election, but given the complicated year Kazakhstan has been experiencing, the timing for this impending presidential poll seems strange.

Or perhaps due to the country’s recent problems the timing could not be better.

Kazakh voters in June passed a package of Tokayev-proposed amendments to the constitution in a national referendum. Some powers of the executive branch were transferred to the legislative branch, the number of seats in the Mazhilis, the lower house of parliament, was cut and the responsibilities of the upper and lower houses of parliament were slightly altered.

Early parliamentary elections were therefore expected and Tokayev announced on September 1 they would be coming, but not until some time in the first half of 2023.

Tokayev was elected president on June 9, 2019, so it is less than two years until his five-year term in office expires. It is Tokayev’s first term in office and according to the constitution he can serve two terms.

Interestingly, Tokayev said in his address that he “recommends” limiting a president to a single seven-year term in office, though the constitution just passed in the referendum preserved the limit of two five-year terms in office.

If that change is made before the snap presidential election and Tokayev successfully wins re-election, he would stay in office until 2029. If he was to wait until 2024 and run for another five-year term in that year, 2029 would also mark the end of his presidency.

So there seems to be some urgency to the plan to hold the presidential election now.

Tokayev told the nation in his address that an early election is needed now because “for the successful implementation of fundamental and comprehensive reforms on the way to creating a just Kazakhstan, a new mandate of trust from the people is needed.

One aspect of those “reforms” is the disassembling of the system of government, and more importantly, patronage, as developed by Tokayev’s predecessor, Kazakhstan’s first president, Nursultan Nazarbayev, over the course of nearly 30 years.

According to the Kazakh authorities, amid the January unrest there was an attempt to overthrow the government, but officials have guided their vague comments on that towards the protesters on the streets and away from the people who were in the government at the time.

There are strong suspicions that Nazarbayev loyalists were behind the attempt to oust Tokayev.

The National Security Committee (KNB) chief, the prime minister, the defence minister, and the Mazhilis speaker, all people close to Nazarbayev, were quickly dismissed along with other lower ranking officials in the KNB, including one of Nazarbayev’s nephews. In the months since, dozens of provincial officials have been replaced.

Tokayev installed his people in the vacated positions. So, within the government, Tokayev’s place is more secure now than it has ever been during his presidency. But there are still powerful figures in Kazakhstan who owe their success to Nazarbayev and might have been connected to the plot in January to remove Tokayev.

Tokayev might feel his re-election would provide him with the mandate necessary to remove or render harmless some of those from the Nazarbayev era who remain a potential threat to him; some of Nazarbayev’s immediate relatives and close friends, for example.

The majority of Kazakhstan’s people, who for years watched Nazarbayev’s family and friends grow fabulously rich, would almost surely support Tokayev laying low the once high and mighty of the Nazarbayev period and Tokayev would breathe easier knowing they were less of a problem for him.

Much of Tokayev’s September 1 address was about planned improvements in living standards for the people of Kazakhstan, so it doubled as a campaign speech.

Kazakhstan’s economy has been battered by disruptions to the country’s trade with and through Russia. Drastic reductions in supplies of cheap Russian flour and sugar are two of the more prominent examples since these impacts led to sharp increases in prices in Kazakhstan.

On the brighter side, the government just announced that it will soon lift its ban on grain and flour exports that was put in place on July 8, indicating officials believe this year’s harvest will be adequate to feed Kazakhstan’s people this winter, while allowing for some exports.

Back on the geopolitical side, Kazakhstan’s relationship with Russia remains troubling. Tokayev called for help from the Moscow-led Collective Security Treaty Organisation (CSTO) during the "Bloody January" unrest and for the first time in its 30-year history, the CSTO sent peacekeeping troops to a conflict zone. The 2,500 troops were mostly Russian, and their role was to guard key facilities, but symbolically their arrival was a message to those trying to oust Tokayev that the Kremlin was siding with the incumbent.

If the Russian government believed that intervention would secure Tokayev’s undying loyalty, there was surely disappointment in the wake of the invasion of Ukraine. Kazakhstan did not declare support for Russia and, while Kazakh officials have been very careful in their comments, it is clear Tokayev’s government is unhappy with Russia’s aggression in Ukraine.

Kazakh Foreign Minister Mukhtar Tleuberdi said in February that Kazakhstan would not recognise the claimed independence of the Russian-occupied Ukrainian regions of Donetsk and Luhansk. Tokayev even said the same while sitting next to Russian President Vladimir Putin at the St Petersburg Economic Forum in June.

Some Russian officials, including Putin, have commented on how part or all of Kazakhstan is historically Russian land. There have been hints that Russia might at some point move to take it back. Such talk has obviously worried many people in Kazakhstan.

Currently, Russia’s attention is fixed on Ukraine and the outcome of the war there is uncertain. So long as the war goes on, there’s little chance that Moscow can cause significant problems in Kazakhstan.

But Russian soft power has proven an effective tool in Central Asia. Russian media played a large role in ousting then-Kyrgyz president Kurmanbek Bakiyev in 2010. Russian television channels are widely available in Kyrgyzstan, particularly in the north, and the black PR campaign launched against Bakiyev contributed to popular anger against him.

Russian television is also widely available in Kazakhstan and given sufficient time, could also run a media campaign against Tokayev, if there were ample time to develop and launch it.

By holding a presidential election within the next couple of months, Tokayev mitigates the risk of Russian mischief during the presidential campaign.

There are likely other reasons for the rush to get voters to the polls, but the need for a vote of confidence in the president’s plans for reform is not likely the driving force behind this snap presidential election.