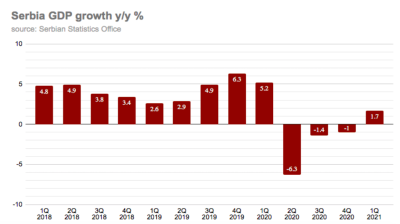 Serbia exceeded its pre-crisis level of GDP in Q1 this year, governor of the National Bank of Serbia (NBS) Jorgovanka Tabakovic said during the 91st Annual General Meeting of the Bank for International Settlements (BIS) via video-conference on June 29.

Serbia’s economy managed to weather the coronacrisis better than most in the region, with a dip in GDP of only around 1%, and is poised to rebound strongly this year.

While GDP dipped by 6.3% year-on-year in the second quarter of 2020, this followed a strong performance in Q1 last year, and only modest y/y declines in the second half of the year, thanks to the country's diversified economy and strong government support. This was followed by 1.7% y/y GDP growth in Q1 2021, above the already strong base a year earlier.

“Everything we have been doing and have done over the past years — from achieved and preserved price stability and relative stability of the exchange rate, anchored inflation expectations and a robust financial system to the highest FX reserves on record - testifies to our commitment to stability and strengthening of the country,” Tabakovic told the meeting.

“Our pre-emptive actions helped us tackle the economic fallout from the pandemic from a much better starting position. At the onset of the pandemic, the NBS was among the first to respond in order to support citizens, businesses and the government to more easily weather the crisis financially, whereby we also ensured smooth functioning of all financial flows,” she added.

“We were also among the first regulators in the region and Europe that introduced a moratorium on the repayment of liabilities, and we further reduced the NPL share in total loans - to 3.7%. Despite the crisis, we made sure to preserve the created defence mechanisms, as seen in gross FX reserves which at end-May exceeded the end-2019 figure by around € 780 mn. All this together enabled Serbia to exceed its pre-crisis level of GDP already in Q1 this year, and to preserve favourable financing conditions and stability in all segments of the financial market,” Tabakovic said according to a statement posted on the NBS website.

During the meeting, the joint conclusion was that, owing to intensive cooperation between central banks and governments, the negative effect of the economic shock on the economy and financial system was significantly mitigated.

The decline in output of automotive industry companies, which accounted for 17% of total manufacturing output in August, accelerated from a 6.7% drop in July.

Romania’s industry stagnates, dragged down by disruptions in car production

Romania's automotive industry had been going strong pre-crisis and seemed to recover in late 2020 — only to be depressed by the semiconductor crisis this year.

Slovak inflation in September up to its highest figure in 10 years
1 day ago
Montenegro’s debt set to fall for first time since independence
2 days ago
Georgia’s domestic exports strengthen on high metal prices
2 days ago
Hungary’s automotive sector output plunges on chip shortage
2 days ago
Romania’s industry stagnates, dragged down by disruptions in car production
2 days ago