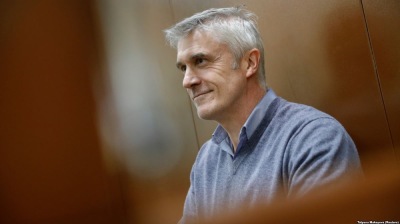 US fund manager Michael Calvey will be in jail until April when he will defend himself against fraud charges
By bne IntelliNews February 20, 2019

The Central Bank of Russia (CBR) inspected Orient Express Bank (OEB, aka Vostochniy bank) six months before the arrest of top US fund manager Michael Calvey on February 14 and found a lot of problems on its balance sheet. US fund manager Calvey and five of his colleagues from Baring Vostok Capital Partners (BVCP) are now in jail awaiting trial on charges of large scale fraud in connection with a case involving the misevaluation of the bank’s shares.

The CBR says it completed an inspection of OEB six months ago and it was on the list of banks to be closed unless the shareholders recapitalised it before April, The Bell reported on February 20.

The CBR is in the midst of a banking sector clean-up that is coming into its end game as the number of banks in Russia fell below 500 in November. The regulator has been closing about three banks a week since 2013 when CBR governor Elvira Nabiullina took over the helm. She has targeted smaller banks that are undercapitalised or not doing “real” banking business. As bne IntelliNews reported in 2017 in “Russia’s great daylight bank robbery,” Russia’s banking sector has been plagued by owners helping themselves to depositors’ money by making loans to themselves.

OEB is one of the better banks in Russia and has been a major player on the consumer credit market, targeting consumers in Russia’s far flung regions.

A check by the regulator showed that the bank should have already been taken over by administrators, and the situation was made more difficult following a merger with another bank, the retail lender Uniastrum Bank that belongs to BVCP’s Russian partner Artem Avetisyan that came with a lot of problem loans.

Uniastrum has a chequered history. Formerly run by businessman George Piskov, the bank made its name building up a money transfer business and at one point former UK Chancellor of the Exchequer Lord Norman Lamont who briefly was the chairman of the Uniastrum advisory board. By the end of the noughties it had become the biggest money transfer bank in the former Soviet Union, used by migrant workers in Russia to send money home to their families. The Russia-Armenia wire transfer business was especially large.

As the last decade came to a close Uniastrum was one of the 30 biggest banks in Russia, but reading the writing on the wall Piskov went shopping for strategic investors and the bank closed a deal to sell an 80% stake to the Bank of Cyprus on October 31, 2008, impressively closing the $576m deal in the eye of the financial firestorm that was raging around the world.

"We understood that without new capital there would be no way to fund our operations, as we had depleted our own personal reserves by the end of 2006 and we could see the crisis looming," Piskov told bne IntelliNews at the time in immaculate English that even has a touch of the Ascot accent about it, where he had his London home.

But the partnership eventually soured and in 2016 Uniastrum was in trouble again, this time deciding to merge with OEB. Uniastrum was sold by the Bank of Cyprus to Russia's Regional Credit bank in 2015 and took a 40% stake in OEB.

It was during all these deals that Avetisyan entered the shareholders capital of OEB and currently holds a 32% stake.

The combined bank has never really managed to get back on its feet. 2015-2016 was a desert in the Russian banking sector where the entire profit of the sector was earned by state owned Sberbank on its own with every other bank in Russia either flat or loss-making, as bne IntelliNews reported on extensively at the time. The CBR has been using the tough times to clear out the dead wood from the sector as owners have been unwilling or unable to recapitalise their banks and rolled over when the CBR ordered them to close.

OEB has been no different. Despite a recapitalisation at the start of 2018, the CBR has been demanding the shareholders put in more money before April or the bank’s license would be pulled.

Typically, OEB still contained a lot of distressed assets and bank loans that were associated with the Russian partners Avetisyan and Sherzod Yusupov, The Bell reports.

RBC and Vedomosti both have seen the central bank’s audit of OEB, which ended last August and showed that the “critical level of credit risk” was due mainly to insufficient control over the quality of the assets of Uniastrum, taken on the balance sheet during the merger in 2017. Avetisyan received 32% of the merged bank with BVCP taking 44.5% in that deal.

At the time of the merger OEB was funded by deposits it had collected as part of its regional business as well as Uniastrum’s business. After the merger, OEB’s credit risk associated with business it took on in the merger grew substantially, according to the CBR audit. As of August 1, 2018, 55%, or RUB20.5bn ($311mn), of the corporate debt portfolio was accounted for by two groups of borrowers — the Zykov Group and the Volgabas Group.

Avetisyan and Yusupov are well acquainted with the former co-owner of Poltava Canned Food and Mushroom Farm Shopping Mall owner Vyacheslav Zykov that owns the Zykov Group. Together they belong to an association called the Club of Leaders, reports The Bell. Yusupov also had stakes in Zykov’s companies, which were eventually bought out by Uniastrum Bank, and after the merger, ended up on the OEB balance sheet.

It's a classic banking story and exactly the sort of scam that the CBR has been trying to cleanse the sector of: instead of being a “real” loan, OEB regularly restructured these obligations, putting off the demand for repayment indefinitely so in effect the loans never have to be repaid, the CBR concluded in its audit.

After verification, assets and credit liabilities associated with these companies were depreciated by an average of 44% by the CBR which demanded the bank sort its loan book out or face closure.

At the same time the CBR audit found that the value of real estate transferred to OEB during the merger may have been overestimated by as much as RUB8.17bn ($125mn). Part of the problem with illiquid assets on a bank’s balance sheet is the current regulations allow bank managers to value them at any price they like as there is no liquid market to check the valuations against. This is a systemic problem in Russia’s financial sector as abuse of illiquid valuations is a wide spread practise. Baring Vostok held a comprehensive due diligence of Uniastrum Bank before the merger, says Yusupov.

The central bank checked the investments in the assets that appear in the criminal case against Calvey. The results are also disappointing: the CBR concluded that the restructuring of debt with the First Collection Bureau, co-owned by Baring, was also unsatisfactory, reports The Bell. The audit concluded that the restructuring money went to high-risk assets such as the purchase of portfolios of retail bad debts. The risk of OEB’s investments in the shares of the Luxembourg International Financial Technology Group (IFTG) was also recognised as inadequate, reports The Bell.

The regulator pointed out that the questions regarding the valuation of IFTG shares, which form part of the charges against Calvey, are related to the fact that there is no information on the issuer either in the bank or in open sources. In conclusion the CBR ruled that OEB needed to form RUB5.26bn ($80mn) in reserves to cover these obligations, the audit decided.

At the end of the audit the central bank decided that to eliminate violations, OEB needed to form reserves for a total of RUB16.7bn ($254mn) to cover all the dodgy debt and undervaluation of assets on the bank’s balance sheet. It gave OEB shareholders a total of 18 months to put the books in order – a deadline that is due to expire in April.

An additional share issue to cover this amount was planned a year ago. However, the Russian partners didn't have the money to contribute their share and faced dilution. That is when the current corporate conflict broke out, which is ongoing. In the meantime the share issue never happened and the fresh capital has yet to be paid in. If the CBR’s deadline is missed it is highly likely that OEB’s licences will be pulled.

The scandal has now blown up into a very public affair as, the problems of the bank aside, the issue has now taken on a political dimension that is adversely affecting Russia’s investment image. If this affair only involved Russian investors then it likely OEB would simply lose its license, but because of BVCP's involvement if that happens critics are likely to claim that the whole case was an asset grab. The management of the central bank are due to hold a meeting on February 20 with the shareholders of the bank and their representatives to discuss what to do next.

US flips Security Council the bird on Iran

Both sides claim ownership of Goce Delcev, who fought for an independent Macedonia at the turn of the 20th century.