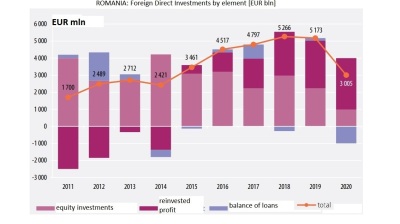 Foreign direct investors in Romania derived €9bn net profits and €2.74bn losses, resulting in a combined figure of €6.26bn (nearly 2.9% of GDP) in 2020, according to a survey conducted by the National Bank of Romania (BNR) in cooperation with the National Institute of Statistics (INS).

The foreign direct investors also derived €0.59bn in net interest derived from loans extended to local subsidiaries. This results in a total of €6.85bn (nearly 3.2% of GDP) net revenues derived by FDI investors from their Romanian subsidiaries.

This was the major source of foreign direct investments (FDI) in Romania, as ‘new FDI’, meaning equity investments by incumbent or new foreign investors, added up to less than €1bn.

12-month rolling reinvested earnings (counted as FDI) surged from €511mn in 2015 to €2.78bn in 2019 and further advanced above €3bn in 2020. This was possible thanks to a rising pool of profits generated by the FDI companies active in Romania. According to more recent data, the volume of earnings reinvested by FDI companies in Romania more than tripled in annual terms to €1.74bn in January-June

Out of the €9.00bn combined net profits derived by the FDI companies in 2020 (those reporting profits last year), €3.00bn was retained (as opposed to distributed to foreign shareholders).

This is half of the overall profits derived by FDI companies last year.

The ‘genuine’ FDI, namely new equity, was just under €1bn.

The BNR reports an overall FDI inflows figure of €3bn, down from €5.2bn in 2019: €3bn reinvested earnings plus €1bn equity contributions minus a €1bn change in the balance of loans. 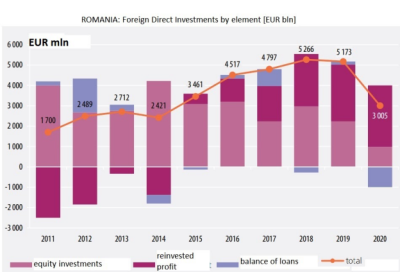 Russia's services PMI falls for second month due to impact of coronavirus
2 days ago
Romania’s industrial prices surge by 26.8% y/y in October
2 days ago
Service sector and public spending save Hungary’s Q3 GDP
3 days ago
Kazakh manufacturing PMI shows return to contraction in November
3 days ago
Poland’s PMI climbs to highest point since August
3 days ago