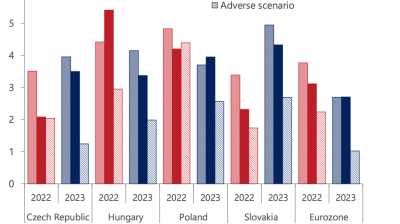 Oxford Economics says Central Europe is one of the most exposed regions to the economic impact of Russia’s invasion of Ukraine and it has cut its GDP forecasts for CEE by an average of 1 percentage point (pp) for this year and 0.5pp for 2023. Moreover, the forecaster says, risks are “tilted heavily to the downside”.

In a note on March 14, Oxford Economics says the impact on the four economies of Central Europe (Poland, Czechia, Hungary and Slovakia) will come mainly through the rise in commodity prices, particularly energy, which will push up inflation and hit real incomes and consumption. “Russian imports of oil, gas, coal, and nuclear material make CEE countries very vulnerable,” it points out.

Food price inflation is also likely to pick up throughout the year, it adds, as wholesale prices of grains and fertilisers are driven higher by sanctions and export/import bans.

It points out that double-digit inflation arrived in the Czech Republic in February, and other countries are likely to follow suit soon. It now expects CPI inflation in 2022 to approach double-digit levels in Poland (9.9%, up 2.2ppts from the pre-war forecast) and Czech Republic (9.1%, up 3.6ppts), with slightly lower readings for Hungary and Slovakia, at 7.1% and 7% respectively. It says Poland and Hungary are particularly vulnerable to inflation being pushed up by currency depreciation and commodity prices.

Companies will be hit by a shortage of key inputs such as nickel, palladium and neon, and a rise in their prices, as well as prices for energy. These shortages will drive up producer prices and cause further stoppages. Some car manufacturers limited or shut down production last week due to a shortage of cable harnesses.

There is also a smaller impact on companies through the loss of the Ukrainian and Russian markets, though this is more significant for certain sectors, particularly car-making, for which Russia is a relatively important export market at around 3% of total exports.

The region’s currencies have been hit by risk aversion, which will also boost inflation. Central banks have been intervening to prop up the currencies. It points out that the Czech koruna, the Hungarian forint and the Polish zloty all lost over 10% against the dollar after the news of the invasion before the respective central banks intervened in FX markets in support of their currencies.

Oxford Economics expects the policymakers to maintain their hawkish stance – which will also affect domestic demand – “but sell-off pressures are likely to continue despite the rate differential to the Eurozone”.

The biggest unknown, the forecaster says, is the impact of the huge refugee wave the region has taken in. It says about 85% of Ukrainian refugees (some 2.4mn out of 2.8mn) have sought refuge in the CEE, and given the geographical and cultural links, most will stay until the end of hostilities, if not beyond.

This will boost consumption and help ease the tight labour markets, but will also involve significantly higher fiscal spending, unless the EU comes to the region’s aid.