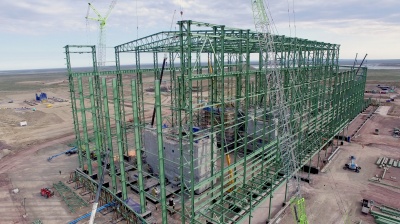 Work on an expansion at the Aktogay open pit copper mine in Kazakhstan.
By Kanat Shaku in Almaty November 12, 2020

CFC Management, a Russia-based investment advisor that represents Maxim Vorobyev and other minority shareholders that jointly control approximately 3.6% of the share capital of Kaz Minerals, has said that its clients intend to vote against a £3bn all-cash buyout offer to take the Kazakh copper miner private.

The announcement comes after KAZ Minerals' fifth biggest investor RWC Partners said earlier that it plans to vote against the offer. Both CFC Management and RWC Partners see the buyout offer, organised by the company’s chairman Oleg Novachuk and KAZ Minerals director Vladimir Kim, as an under-valuation. RWC Partners owns just under 3.3% of KAZ Minerals.

“Nova has put into action a plan that takes advantage of the fact that Kaz Minerals’ share price has been under significant pressure in 2020 due to a number of factors, including the Covid-19 pandemic and uncertainty around the US elections,” said Ekaterina Chernova, CFC management CEO. “If successful at the current value and without an increase in price, the offer will prevent the current minority shareholders of KAZ Minerals from realising the full value of their investment and will not allow them to benefit from growing copper prices, the launch of Aktogay-2 and the development of Baimskaya. We will advise our clients to vote against the Offer.”

The offer was set at £6.40 per share, offering a 12% premium on the previous day's close. The offer is for the 61% of shares in the company not already owned. The buyout would take place via the Nova Resources consortium created by the two shareholders for the purpose. Kim and Novachuk aim to cover the deal via a loan from Russian investment bank VTB, Interfax news agency reported. KAZ Minerals stands as the largest copper producer in Kazakhstan.

"We are deeply underwhelmed by the offer, as we believe it materially undervalues the company's existing and future projects and, under current conditions, we will look to vote against the proposal in order to preserve shareholders' interests," James Johnstone, co-head of the RWC Emerging and Frontier Markets team, said in a written statement.

KAZ's share price had gained 18% so far in the year to date prior to the offer. It skyrocketed by 240% within three years of listing in 2005, but it currently trades at around the same price as when it first listed in London.

KAZ Minerals and its subsidiaries engage in mining and processing copper and other metals in Kazakhstan and Kyrgyzstan. The company operates the Aktogay and Bozshakol open pit copper mines in Kazakhstan along with three underground mines. It is also developing the Bozymchak copper-gold mine in Kyrgyzstan. Moreover, the firm is developing the Baimskaya copper deposit in Russia’s Chukotka autonomous region.

On October 28, Kaz Minerals said an independent committee of the board was recommending shareholders accept the offer. Novachuk explained the rationale for the offer as a result of the company’s “higher risk, capital intensive strategy”, which may be “misaligned with the preference of many investors in the mining sector.”

Nova Resources also said separately that the development of the Baimskaya copper mine in Russia, bought by KAZ Minerals in 2018, “would be best undertaken away from public markets as a private company”.

The $900mn purchase of the undeveloped Baimskaya mine surprised shareholders, leading to a sell-off in the stock after the announcement of it. The mine’s development is set to cost $7bn and take seven years to carry out. KAZ Minerals referred to the mine as one of the world’s biggest undeveloped copper assets.

CAUCASUS BLOG : What can Biden offer the Caucasus and Stans, all but forgotten about by Trump?
LONG READ: The oligarch problem
Central Asia vaccination plans underwhelm, but governments look unruffled