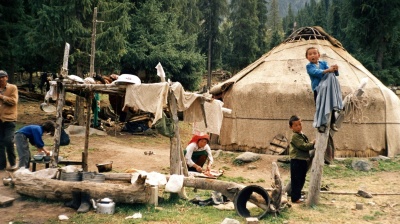 An ethnic Kazakh family in Xinjiang.
By bne IntelliNews January 10, 2019

China has agreed to allow over 2,000 Chinese ethnic Kazakhs to leave the country amid an international backlash against Beijing's “re-education camps”, Kazakhstan's Foreign Ministry said in a January 9 statement.

The camps are said to hold over a million ethnic-Uighurs and thousands of ethnic Kazakhs in China’s far west Xinjiang Uyghur Autonomous Region.

Kazakhstan, as China’s “key” partner in the huge Belt and Road infrastructure initiative seeking to create Central Asia transit hubs for Chinese goods heading to Europe, is currently heavily reliant on Beijing for foreign investment. Increasing dependence on Chinese investment for which Kazakhstan's neighbours are also competing constrains the Kazakh government from aggressively pursuing the situation with the ethnic Kazakhs in the camps. Nevertheless, it looks like China has been convinced to allow at least some of them to leave Xinjiang.

Upon their arrival in Kazakhstan, a country of 18mn, the ethnic Kazakhs will be allowed to drop their Chinese citizenship and apply for Kazakh citizenship or permanent residency.

Chill fell over tight-knit community
The Associated Press reported on January 9 that the detentions of people sent to the camps sent a chill over the tight-knit community of Chinese-born Kazakhs living in Kazakhstan. Many had left China to pursue business opportunities or educate their children in Kazakh schools as restrictions tightened in Xinjiang. Hundreds lost contact with relatives in Xinjiang, and many began writing letters and attending media conferences, hoping that greater publicity would help bring their loved ones home, the news agency reported.

Serikzhan Bilash, the head of the Kazakh advocacy group Atajurt, was quoted as saying he was warned by officials in Kazakhstan to halt his activities four times last summer but that the warnings later stopped and in December he was invited onto a popular Kazakh talk show for an hour, indicating growing tolerance of his work publicising the plight of detained Kazakhs. “I said that Chinese officials are dangerous for central Asia, for Kazakhstan. They’re starting to accept my opinion now,” Bilash was cited as saying.

Substantial Chinese investments in Kazakhstan have been channelled into infrastructure projects, the recent launch of a soon-to-be regional financial hub and automaking. Astana would be bitterly disappointed to see such capital commitments dry up.

The re-education centres are said to fight extremism with "thought transformation"—detainees are forced to swear loyalty to Chinese President Xi Jinping and renounce or criticise their own faith, rights groups say.

The Chinese authorities, which view the re-education facilities as part of a successful de-radicalisation project, have recently said they would start sending fewer people through them, but they show no sign of backing down on running the programme.

Pressure on Kazakh government
In August, a Kazakh court ordered the release of ethnic Kazakh Chinese citizen Sairagul Sauytbay who was convicted of an illegal border crossing. That prevented Kazakh authorities from deporting her to China, where she would have potentially faced severe punishment.

In trial testimony, she said Chinese authorities forced her to train "political ideology" instructors for camps in Xinjiang. That, she claimed, gave her access to secret documents on a Chinese state programme to "reeducate" Muslims from Xinjiang's indigenous ethnic minority communities—mainly Uyghurs, ethnic Kazakhs, ethnic Kyrgyz, and Hui (Dongans).

The explosive court case placed additional pressure on Kazakhstan to intervene or speak out on behalf of ethnic Kazakhs in China, 200,000 of whom have become Kazakh citizens in recent years. The issue is particularly sensitive for the Kazakh government, which has previously faced a backlash from the ethnic Kazakh population for attempting to lease land to China. The issue led to mass protests across Kazakhstan in 2016. By convincing China to release at least some of the Xinjiang-based ethnic Kazakhs, the government may have partially dodged a major grievance with a potential to compound into a larger issue over time.

Appeal to Merkel
Dozens of ethnic Kazakh repatriates originally from China appeared at Germany’s consulate in Kazakhstan’s largest city Almaty in October to appeal to German Chancellor Angela Merkel for help in seeking the release of relatives from the "re-education camps". Such demands by activists may have helped pressure both the Kazakh government and China into slightly alleviating the issue.

It is still unclear, nevertheless, how many Kazakhs still remain in the facilities.

The Kazakhs are a Turkic people who mainly inhabit northern parts of Central Asia—largely Kazakhstan, but also parts of Uzbekistan, China, Russia, Mongolia and Kyrgyzstan.