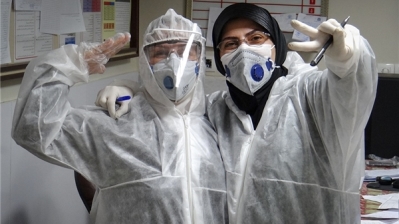 Iranian medics are said to have been working at great risk to themselves, making do with substandard equipment as Iran attempts to address its severe coronavirus outbreak.
By bne IntelIiNews March 16, 2020

China on March 16 urged the US to immediately lift sanctions on Tehran to help Iran respond to its severe coronavirus (Covid-19) outbreak, which has claimed 853 lives so far.

"Continued sanction on Iran was against humanitarianism and hampers Iran's epidemic response & delivery of humanitarian aid by the UN and other organizations," China's ministry of foreign affairs said in a tweet.

Beijing’s call came after Iranian President Hassan Rouhani wrote to world leaders at the end of last week stating that Iran’s struggle against the coronavirus was being “severely hampered” by US sanctions. Iranian Foreign Minister Mohammad Javad Zarif said on Twitter: “In (a) letter to counterparts @HassanRouhani informs how efforts to fight #COVID19 pandemic in Iran have been severely hampered by US sanctions, urging them to cease observing them”. Zarif added: “It is IMMORAL to let a bully kill innocents.”

Iranian authorities say they have been particularly undermined by global supply shortages for tests and protective equipment. They blamed the effect of US sanctions.

Iran said last week that it had asked the International Monetary Fund (IMF) for $5bn in emergency funding to combat the coronavirus outbreak. It was the first time Tehran had approached the IMF for funding since the 1960s. It remains to be seen whether the US might attempt to stand in the way of such a funds provision.

Washington has relentlessly hit Iran with more and more heavy sanctions since mid-2018 in a bid to force Iran to play a diminished role in Middle East affairs and place even tighter controls on its nuclear development programme. Tehran refers to the US sanctions barrage as an “economic war”. The sanctions are not supposed to hinder humanitarian supplies to Iran but Iranian officials say that because the sanctions make arranging the financing of trade with the Islamic Republic so tough and daunting—with potential transaction parties often fearful, rightly or wrongly, that they could fall foul of secondary sanctions—that they effectively do.

The official COVID-19 infection count in Iran had reached 14,991 cases by the end of March 16.

However, Dr. Rick Brennan, World Health Organisation (WHO) emergency director for the Middle East region, who was on a mission to Iran last week, told Reuters on March 16 that the number of cases reported in Iran could represent only about a fifth of the real numbers. The reason was that testing, as is the case even in some wealthy European countries, was restricted to severe cases.

"We've said the weakest link in their chain is the data," he said. "They are rapidly increasing their ability to test and so the numbers will go up," he said.

Despite earlier strong criticism of Iran's strategy for dealing with the pandemic both from government critics and a UN official last week, Brennan was reportedly generally upbeat about Tehran's response. "There's a great commitment and they are taking it seriously from the highest level of government," he said.

Brennan described visiting new centres in Iran with dozens of beds where everything from the bed sheets, to the oxygen masks had been made locally. Some of the locally-produced personal protective equipment was exposing medical workers to risks, he said, acknowledging that some health care workers had been infected, but adding that the cause of infection was not clear.

"We are impressed that Iranians have acknowledged their weaknesses and are working on them," Brennan said.

The Iranian Nowruz new year holidays start on March 20 and will extend into early April. Officials face the dilemma of how to avoid the travel surge generated by the vacation period causing another spike in coronavirus infections.