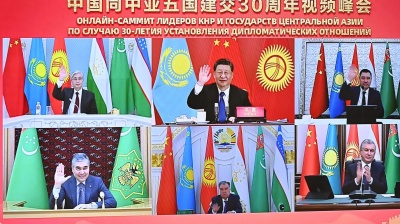 All for one and none for all? / (Kyrgyz presidential administration).
By Almaz Kumenov for Eurasianet January 26, 2022

China’s president gathered his five Central Asian counterparts for a virtual jamboree on January 25 to celebrate 30 years of diplomatic relations. The public announcements from the meeting were rich with data and included the standard promises for further economic integration.

Yet each Central Asian leader promoted his own agenda, apparently less concerned about regional issues than by their country's bilateral ties with the Chinese economic juggernaut.

Kazakhstan's President Kassym-Jomart Tokayev discussed the recent bloody unrest in his country and pledged systematic reforms. "We have started building a new Kazakhstan," Tokayev said. He stressed that he is working to eliminate corruption in the customs service to facilitate exports to China.

For his part, Chinese President Xi Jinping vowed to open China’s domestic market to more Central Asian goods and agricultural products. This would be especially good news in Kazakhstan, where exporters suffered significant losses last year when China tightened border regulations, allegedly due to the coronavirus.

Xi also pledged $500mn in grants to Central Asian countries within the next three years for socially important projects and 50mn more doses of Chinese-made COVID-19 vaccines this year.

For all these plans to materialise, Beijing needs stability in Central Asia. It has evidently followed with concern the events in Kazakhstan, where days of unrest amid a possible coup attempt earlier this month left at least 227 dead.

To that end, Xi elicited soothing words from Central Asia’s leaders about their distaste for “colour revolutions” – authoritarian shorthand for popular protests. In a joint statement, the leaders also promised to support the "One China" policy, which sees Taiwan as an integral part of the People’s Republic.

Unmentioned was the situation in Xinjiang: the vast, Muslim-majority region bordering Central Asia where China has incarcerated up to a million people in re-education camps. It is a sensitive political issue in some Central Asian countries, especially Kazakhstan and Kyrgyzstan.

Belarus expands its use of the death penalty
1 day ago
The Mariupol siege is over as the last Azov defenders surrender
2 days ago
Kyrgyzstan: Eccentric health minister fights for his job amid claims of corruption and bullying
2 days ago
Azov commanders have remained behind in the Mariupol steelworks to continue the fight
2 days ago
Russia hopes Chinese carmakers will help revive Moskvitch brand
2 days ago