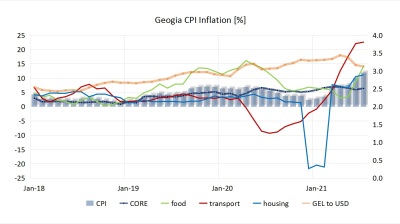 Georgia’s consumer price index moved up a chunky 1.3% in July, which took annual inflation to 11.9% y/y from 9.9% y/y in June, according to data from statistics office Geostat.

The National Bank of Georgia summoned the monetary board on August 4, immediately after the July inflation numbers were announced. The arguments in favour of a rate hike have accumulated quickly recently: a robust recovery, healthy lending and inflation above expectations.

Just as with the June GDP data (+18.7%) that recently surprised analysts, inflation seems to have risen above what was forecast. Galt & Taggart analyst Lasha Kavtaradze voiced expectations for double-digit inflation towards the end of the year and 8.3% average annual inflation - 1 pp above the IMF’s projection. Speaking of the Fund, it hopes Georgia can bring inflation down to 2.8% y/y in 2022, including through the use of more hawkish policy.

Although core inflation was only 6.4% y/y in July, compared to 6.9% in April-May, the central bank might tighten its policy by further upping the refinancing rate from the 9.5% where it stands now. The stronger than expected recovery (+12.7% y/y in H1) could ease the way to such a decision but the global concerns over the continuation of the economic recovery in H2 are a significant deterrent.

Rising food prices were the main inflationary driver in the latest data while more expensive transport, mainly from fuel prices, also contributed significantly. More moderate prices of communications, clothing and footwear and education did not provide enough weight to prevent the price surge. The strengthening of the local currency starting with May but more pronounced in June-July is likely to surface in prices only later.

Average transport prices (+1.4% m/m), mainly driven by the price of fuels, soared by 22.5% y/y but because of their smaller weighting in the total consumption basket compared to food, they only contributed 2.65 pp to annual inflation.

Inflation expected to reach 13.9% in December as war in Ukraine keeps fuelling supply-side issues in some key commodity markets.

Despite the authorities’ demand for ‘lira-isation’ few Turks have any real faith in the national currency as inflation runs riot.