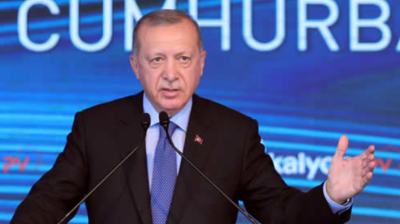 Erdogan making his promise of "good news" during the opening of Turkey’s first solar panel factory.
By bne IntelIiNews August 19, 2020

Turkey has made an energy discovery in the Black Sea, most likely of natural gas, two people with direct knowledge of the matter were quoted as saying by Bloomberg on August 18.

The day saw Turkish President Recep Tayyip Erdogan promise to deliver Turks some “good news” on August 21 that would signal “the beginning of a new era” for the nation. He did not specify what the announcement would be about. Turkey is almost entirely reliant on imports to meet its energy needs. Erdogan is actually in dire need of some good news to relay to an electorate anxious that the country could be slipping towards its second balance of payments crisis within two years and plagued by disturbing levels of unemployment.

The size and depth of the discovery, and whether it will be feasible to extract it, remain unclear.

“Market getting all exited”

In a note to investors, Timothy Ash at Bluebay Asset Management, cautiously advised: “Market getting all excited about this and assuming it is the good news Erdogan promised everyone for Friday. I assume that is the day after the CBRT [Central Bank of the Republic of Turkey] fails to hike policy rates. Talk of gas find—but all the littoral states have been looking for gas in the Black Sea and so far no one seems to have found anything.”

Erdogan made his televised remarks during the opening near Ankara of Turkey’s first solar panel factory, constructed by Kalyon Holding. After he spoke, the Turkish lira (TRY) traded 2% stronger against the dollar, though by around 19:55 Istanbul time it was only 1.1% up at 7.2838.

The Turkish president also took the opportunity to reiterate his vow that Turkey would pursue energy exploration in contested eastern Mediterranean waters, a strategy that has triggered confrontations with Greece, Cyprus and the European Union, among others, and has prompted France to deploy warships and fighter jets to the vicinity.

“No colonialist power can deprive our country from rich oil and gas resources estimated to be in this region,” he said, adding: “We don’t violate anyone’s rights. We don’t seek confrontation or tension in the Mediterranean, the cradle of civilisations. We only defend the rights of our nation and the Turkish Cypriots. We expect our interlocutors, as well, to take steps which would lower, not escalate, the tension and pave the way for dialogue.”

In the eastern Mediterranean, Turkey has disputed Greek and Cypriot interpretations of where exactly their continental shelves extend to geographically.