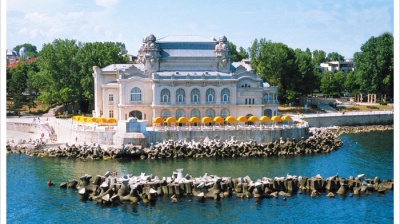 Constanta is home to the largest port on the Black Sea and is an increasingly important gateway of food, material, humanitarian relief, as well as US and allied military personnel. / romaniatourism.com
By Jeff Lightfoot in Constanta May 12, 2022

Romania is a frontline state in the increasingly bloody conflict between Russia and Ukraine. For years before Russia’s latest invasion of Ukraine, Romanians had told any American visiting the region that it was the Black Sea – more than the Baltic region – that had suffered most from Russian aggression since the end of the Cold War. Last week I had a chance to visit the port city of Constanta on the Black Sea to see how Russia’s latest war on a sovereign Black Sea neighbour has impacted the private sector and wider business environment in the region.

Constanta is home to the largest port on the Black Sea and is an increasingly important gateway of food, material, humanitarian relief, as well as US and allied military personnel based at the Mihail Kogalniceanu air base, just a few kilometers away from Constanta. Particularly with the war damage to Ukrainian port infrastructure, Constanta is likely to play an increasingly important role in the Romanian, regional, and even global economy.

Yet despite the optimism in Constanta about its future economic prospects and the diligent efforts of city and county officials to promote investment in the region, I came away from my visit struck by five central issues that are shaping the concerns of business and policy makers in Romania.

How (and when) will the war end?

In conversations with diplomats, government officials, and business leaders, there was growing concern and uncertainty about where the war is going and what the US and its allies are looking to achieve. While the new US provision of $33bn of military and humanitarian support to Ukraine was a welcome sign of US resolve, divergent statements from US and allied officials about American goals and policy toward Russia have raised concerns about the risks of escalation, mission creep, and an increasingly regionalised conflict.

Even Romania, one of the most strident and anti-Russia voices in Nato, has been somewhat cautious in its military support for Ukraine and how it talks about that support. Romanian business leaders also expressed concern that the eventual reconstruction of Ukraine will push up prices and labour costs in Romania as these two input costs become more scarce.

Can the West think strategically about the Black Sea?

There is a need for an integrated economic, security, and political strategy for the Black Sea. Viewing these issues in isolation fails to take into account the various interlinkages between them. For example, the renewed imperative to identify additional oil and gas sources in the Black Sea to help break the region’s dependence on Russian energy will prove a challenge if the region is effectively dominated by the Russian Navy due to the closure of the Turkish straits to allied warships. Spending just a few days in Romania shows that defence and security questions are intricately linked to economic development questions.

Can Romania catalyse its energy exploration?

The resistance of Hungary, Slovakia, Czechia and others in Central Europe to a speedy oil embargo on Russia demonstrates the importance of Europe’s coastal states in helping the EU’s landlocked countries to diversify their sources of energy. However, for years Romanian politicians have dragged their feet on granting offshore energy permits to US energy giant Exxon Mobil. Now many Romanians regret having wasted these years and effectively having chased off a major US supplier with the technical expertise and capital to quickly find new resources. Today, ongoing energy exploration work in the Black Sea is put at risk by aggressive Russian naval tactics that put operations at risk.

Business association leaders also complain that foreign investment in new energy exploration is blocked by bad Romanian legislation written in previous years by corrupted officials. The new foreign investment screening might better protect the sector from corrosive capital investments that could put national security at risk. But is Romania going to be able to reform its energy investment framework to unlock its regional energy potential?

Will the US and EU keep rule of law pressure on Romania and other frontline states?

Countries like Romania deserve top US and European support for their resiliency, security, and management of refugees. Romanian politicians I spoke to urged additional resources from the US not only to Ukraine but also to frontline allies like Romania to bulk up their defence and resiliency.

But particularly as more resources flow to the region, the US and EU must keep up pressure on political and business leaders to continue reforms to the rule of law environment, to stamp out corruption, and to improve the investment environment to attract high end constructive capital. The business community too needs to play its part in leading in best practices on corporate governance, business integrity, and compliance, particularly if the region hopes to attract high-end investment.

How to navigate sanctions compliance in the Black Sea?

One business leader I spoke to in Constanta echoed the familiar refrain from Centre for International Private Enterprise (CIPE) partners all over Eastern Europe, the Caucasus and Eurasia: angst about the growing complexity and breadth of Western sanctions and how businesses can comply in a very complex business environment. Major Russian oligarchs are in some cases heavily invested in regional construction companies active on infrastructure projects in sensitive sectors – a growing concern of business and policy makers alike.

Ultimate beneficiary ownership transparency remains a challenge. Compliance capacities are underdeveloped for domestic businesses. As a crossroads between the divergent business cultures of Russia, Turkey, the Caucasus, and Europe, the Black Sea business environment is fraught with complexity that defies simple solutions.

As always, I came away from my visit energised by Romania’s strong pro-Atlantic orientation, boundless optimism, and eagerness to court constructive capital from the US and other sources. But it was also crystal clear that Romania’s economic development potential is also closely tied to regional security and to the quality and effectiveness of its governance and legislation.

Jeff Lightfoot is Programme Director, Europe, at the Center for International Private Enterprise and leads CIPE’s Europe-wide office in Bratislava, Slovakia. In this capacity, he is responsible for directing and growing CIPE’s programming within the European Union member states and developing CIPE’s relationship with European institutions.

Slowly but surely, village by village, the Ukrainian army is advancing towards Kherson. This city of more than 200,000 inhabitants was one of the first large Ukrainian cities to fall in the early days of the conflict.

To the surprise of many, each of the Central Asian Republics has maintained a neutral stance on Russia’s military operations in Ukraine.

Turks are rightly proud of the success of Bayraktar drones in the conflict in Ukraine and Kyiv was grateful, but now they are not so sure as Turkish President Recep Tayyip Erdogan plays both side of the fence.

HESS: West wins the default battle but the economic war must go on

The Russian Federation has defaulted on its debts, failing to pay interest on a pair of Eurobonds within their 30-day grace period that ended on 26 June – another blow struck against Russia in an escalating economic war.