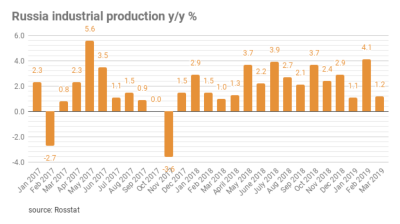 Russia: industrial output slowly dramatically to 1.2% in March, down from a surprise 4.15 in February
By Dmitry Dolgin chief economist Russia at ING in Moscow April 16, 2019

The return of industrial output to moderate 1.2% year-on-year growth in March confirms the technical nature of February's 4.1% y/y spike. So far we see signs of a slowdown of investment activity at the beginning of 2019.

The slowdown in industrial output growth to 1.2% y/y in 1Q19 (we expected 2.5% y/y, consensus 2.8%) confirms the temporary nature of the 4.1% y/y spike seen in February, which, to remind, had received a 2.5 percentage point boost from the calendar effect and a spike of production in volatile sectors. The output in the manufacturing sector, accounting for 50% of total industrial output, slowed from 4.6% y/y in February to 0.3% y/y in March.

Additional pressure came from the deepening drop in the heat & electricity generation (13% of industrial output) from -1.1% y/y to -4.8% y/y amid abnormally warm weather (average temperature in Russia in March 2019 was 6 degrees higher y/y).

The only steady growth is shown by the commodity extraction sector (37% of industrial output), which decelerated only moderately from 5.1% y/y to 4.3% y/y - confirming a high dependence of the economic growth on the external sector at the moment.

Overall, we take the current industrial output dynamic as another sign of weakening local investment activity, along with the zero growth in imports reported for 1Q19, very low 0.1-0.3% y/y growth in construction in 2M19 and modest 5-6% y/y growth in nominal corporate loans (net of FX revaluation effect).

The lack of broad-based investment demand in the real sector results in the accumulation of the foreign assets by the private sector but eases the local competition for credit for the Finance Ministry, which has ambitious RUB1.5-1.8 trillion annual OFZ net placement plans for the next three years. In the longer run, the weak real sector performance might result in increased calls to provide more budget support through state infrastructure spending.

OPINION: Why the Russian economy will inevitably become green after the COVID-19 epidemic is over

Investors are “risk on” again thanks to the coronavirus, but the climate crisis has not gone away, nor has work to build a financial green infrastructure stopped. Russian companies will inevitably join the fray and are already taking action

The Central Bank of Russia will make FX sales of more than $2.6bn in May, lowering the risks of a weaker ruble.

LONG READ: A thinking exercise on Turkey and its lira
3 days ago
COMMENT: Waking Sleeping Beauty: shaking up Uzbekistan’s banking sector
2 days ago
COMMENT: Will Central Europe’s economic recovery be stymied by populist banking laws?
10 days ago
OPINION: Why the Russian economy will inevitably become green after the COVID-19 epidemic is over
10 days ago
ING: Russia - The curious case of FX interventions
17 days ago