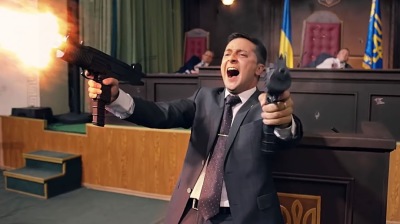 It could be argued that the resignation of central bank governor Yakiv Smolii last week marks the end of Ukraine's attempt at serious reforms and the completion of a "soft coup" where the old guard have retaken control of the country
By Robert Homans in Los Angeles July 7, 2020

The week before last, Yakiv Smolii announced he was resigning his position as Governor of the National Bank of Ukraine (NBU), citing “political pressure.” Last Thursday, Parliament overwhelmingly “accepted” his resignation.  Why has this happened now?  What will we expect in the future, especially from a new Governor, whom Ukrainian president Volodymyr Zelenskiy said will be appointed this week?

Smolii joined NBU in 2014, as part of the team brought in by the previous Governor, Valeria Gontareva.  When Gontareva resigned as NBU Governor in 2017, after several threats made against her life over the policies she was pursuing of shutting down banks and targeting inflation instead of running the printing presses, Smolii succeeded her.

As Anders Aslund has pointed out, ”Under his (Smolii’s) leadership, Ukraine’s inflation has fallen to the current level of 1.7% a year, the lowest ever recorded in independent Ukraine. With a floating exchange rate, the hryvnia currency has now stabilized at close to UAH27 per dollar. Moreover, Ukraine’s international currency reserves have surged to $28bn from a low of $5bn in 2015.”  In addition the NBU Discount Rate has fallen to 6%, the lowest in Ukraine’s history as an independent Country, and improving conditions for increased extensions of credit to Ukrainian businesses.

Under Gontareva and her deputy, Kateryna Rozhkova, approximately 90 Ukrainian banks were shut down. In addition PrivatBank, co-owned by Igor Kolomoisky who also owns 1+1 TV Channel on, which Zelenskiy’s comedy show aired, was nationalized by the NBU.

Equally important, under both Gontareva and Smolii NBU went from being not much more than an ATM for former President Yanukovich, in 2014, to one of the world’s most respected central banks in 2019 and 2020.  In 2018 I had the pleasure of arranging a visit to NBU by several people from the National Bank of Ethiopia, along with representatives from other Ethiopian Government agencies.  My counterpart at NBU said that mine was the first time a delegation from a foreign country had ever visited NBU, in order to learn from their success.  She added, ”usually we (NBU) are instructed to go to other countries and learn from them.”

Before becoming governor, Smolii was a successful banker.  As Aslund has also written, ”He (Smolii) was one of the founders of Bank Aval, which remains Ukraine’s best bank, and made a fortune selling to Raiffeisen. He subsequently moved to set up another bank, Prestige Group, which he also sold at a profit. Then, as a good patriot, he decided to serve his nation.”  In other words, financially speaking at least, Smolii can do without the headaches and potential physical harm that may have resulted from him continuing as governor of the NBU until the end of his term in 2025.

Beyond “political pressure,” there are likely several factors that contributed to Smolii’s resignation, perhaps including:

For Ukraine, the two largest sources of remittances are Poland and Russia.  Much of the remittances coming into Ukraine from these two countries are physically brought over the border by the individuals working abroad, but a significant amount comes through the banking system, primarily from those working in countries with no physical border with Ukraine.

Controlling Customs and the Border Police allow for the collection of bribes from those who are physically bringing money across the border, money that must be declared.  Controlling the Tax Service allows one to devise new tax regimes targeted at new real estate construction, etc., in order to capture more of the money.  And, of course, where there are new tax regimes there are new opportunities for demanding bribes.

Soon after Smolii’s resignation, Zelenskiy said that he wants to maintain the independence of the NBU.  The eye of the needle that Zelenskiy must thread, in order to convince Western donors that an independent central bank is, in fact, Zelenskiy’s intent, is very narrow.

I hope I am wrong, but what we’ve seen in Ukraine since early March, including a wholesale change of government, removal of reformers from key government posts, with Smolii the former Governor of the National Bank of Ukraine being the latest example, is a “Soft Coup.”  The definition of a “soft coup” is a forcible change of government control but without the use of physical force.

In the case of Ukraine, the coup plotters likely include selected oligarchs, Russian front men like chairman of the pro-Russia Ukrainian Choice Viktor Medvedchuk and head of the Opposition Bloc Yuriy Boyko (aka Boiko) who, together, control the second largest faction in the Parliament, returnees from exile in Russia of those formerly working for Yanukovych, as well as various Members of Parliament, backed up by the Ministry of Interior controlling the militia, the national police and the border police, with Zelenskiy serving as the convenient prop and, most likely cheered on by Firtash, now in Vienna fighting extradition to the United States.

The “soft coup” can only be successful if those who were on the leading edge of the Euromaidan reforms, and Ukrainian voters who voted for an outcome of last year’s Presidential elections that the antithesis of the objectives of the coup plotters, allow it to succeed.  I am still optimistic that the soft coup can be thwarted.

The effects of the “soft coup” may well include:

I came to the conclusion that what we may now be observing in Ukraine is a “soft coup” based on several events since last March 4, including:

The Euromaidan Reformers, represented in Parliament by the European Solidarity and Golos Parties, are made up of very able individuals, some of whom are very capable of running for President, and perhaps winning.  These people are active in Civil Society, in Parliament and in the media.  However, unless they become a political force in their own right, they will continue to be marginalized.

I have spoken with people who have dealt the Euromaidan Reformers over the years.  Their observation was that there was almost no cooperation but, instead, a lot of rivalries. Putting aside such rivalries is necessary for the development of a means to counter what seems to be taking place.

It will also be necessary for Euromaidan Reformers to reach out to the many Ukrainian voters who likely feel that Zelenskiy’s campaign promises of reform were empty promises, and then convince them that, instead of Zelenskiy and SOTP they will serve their interests.  I am thinking of the voters in the building where my wife has an apartment, where last year they saw 300,000 hryvnia, earmarked for new elevators, vanish, only to be told that the money was used for “political activity,” but without any further explanation.

Ukrainians have been through similar challenges before, but this time they risk losing the opportunity to redeem what 73% of Ukrainian voters supported in the last Presidential election.  I remain optimistic, but the window to derail the “soft coup” is rapidly closing.

Robert Homans is a financial sector expert who has lived and worked in Ukraine for over 15 years. You can follow him on Twitter at @rhomansjr