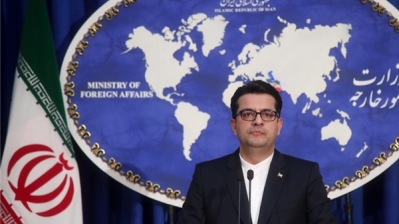 The 165 Iranian dual nationals who died when Ukrainian International Airlines (UIA) PS752 was mistakenly shot down over a Tehran suburb on January 8 “will be treated as Iranian only”, Seyed Abbas Mousavi, the Iranian Foreign Ministry spokesman has said at his weekly press conference.

The statement caused a stir on social media with observers quick to point out that by denying the foreign nationality of the dual-national deceased, Iran could contend it is not liable to pay their families abroad the full amount of compensation demanded.

Iran does not legally recognise dual citizenship under its 1980 Islamic Republic constitution. Despite the archaic rule, immigration police at airports are aware that those who travel abroad often have a second passport and questions are not asked.

All the countries who lost citizens in the air disaster have vowed to demand compensation from Iran.

Foreign ministry officials of the five countries (Canada, Britain, Sweden, Afghanistan and Ukraine) for which the Iranian dual nationals had passports met in London on January 16 to discuss a plan to ensure Iran keeps to its compensation commitments.

Ukraine had 11 citizens on the flight, including nine crew. Canada had 63 citizens, Sweden 10, Afghanistan seven and the UK three.

“The international community is watching. I think that we took as a first positive step the fact that Iran admitted full responsibility [for the loss of the airplane],” Canadian Foreign Minister Francois-Philippe Champagne said, flanked by his fellow foreign ministers, at a subsequent press conference.

“From that admission, obviously, flows consequences, and we expect and demand full co-operation from the Iranian authorities in every step of consular services, identification of remains, investigation and prosecution of those responsible.”

Mousavi also said at his press conference that Mohammad Eslami, Iranian Minister of Roads and Urban Development, had flown to Kyiv, where he would deliver a letter from Iranian President Hassan Rouhani to Ukrainian President Volodymyr Zelensky regarding the loss of the plane.

It is not known whether the letter makes any reference to Iran’s standpoint on compensation.

All aboard the flight to Kyiv perished when an Islamic Revolutionary Guards Corps (IRGC) missile was fired at the Boeing 737 airliner shortly after it departed Tehran’s Imam Khomeini Airport. The IRGC has said the gunner mistook the aircraft for a possible incoming cruise missile and due to a communications breakdown could not consult with superiors on the “trigger” decision.

On January 20, Ukraine said it would press Eslami and his delegation for Iran to hand over the black boxes from the crash.

Ukrainian Foreign Minister Vadym Prystaiko told reporters that returning the black boxes would show that Iran wanted an unbiased investigation of the crash.

“His main task is to apologize and acknowledge what happened. We hope that we can go a little further than just political discussions and discuss practical problems. Among them in particular is the return of the black boxes,” Prystaiko said.

Iran said on January 19 it was attempting to analyse the black boxes from the airliner, denying an earlier report it would hand them to Ukraine.

Meanwhile, on January 20 there were reports that while Gulf carriers are flying over Iraq and Iran, the shooting down of the aircraft and military incidents such as Iran’s missile attack on bases in Iraq used by US armed forces are deterring airlines from outside the region from returning to use of the airspace.

“We will continue to fly to Iran because Iran is an important country to us and it is our neighbour and we want to serve the people of Iran,” Qatar Airways chief executive Akbar al-Baker said on the sidelines of a Kuwait aviation conference.

Qatar has stood in for local flag carrier IranAir in recent years as the Iranian airline could not cope with demand from regional cities including Isfahan and Shiraz due to the lack of serviceable planes in its fleet.

Caucasus airlines including Armenia Airways and Aeroflot were the first to restart flights to Iran, but they have been avoiding night-time flying.

The US Senate on February 13 passed a bill to curtail President Donald Trump's ability to wage war on Iran without congressional approval. The Iran war powers resolution was approved by a vote of ... more

Tehran-backed militias critical to Iran’s efforts to maintain control over Iraq who were mentored by assassinated Iranian Major General Qasem Soleimani have reportedly been placed ... more

It seems unlikely that a war this year with Iran would play to Donald Trump’s electoral advantage and with the number of US service members that suffered traumatic brain injuries (TBI) in the wake ... more