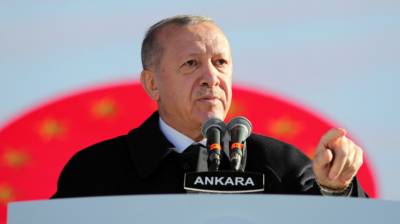 Erdogan addressing a crowd at a youth festival in Ankara on November 16. / Turkish Presidency.
By bne IntelIiNews November 16, 2021

Concerns that Turkey could face another currency crisis continue to grow louder, Capital Economics said on November 16, with the sharp depreciation of the Turkish lira in recent weeks showing little sign of slowing down.

“The currency crashed through the psychologically-important level of 10/$ at the end of last week and has fallen further in recent days to 10.2/$, taking its total losses against the dollar since the start of September to more than 18%. It is, by some distance, the worst performing major EM currency this year,” Jason Tuvey, at Capital, advised investors in an analysis of the situation.

There is a growing risk that the Turkish central bank’s “continued obedience” to pressure from President Recep Tayyip Erdogan for interest rate cuts will result in sharp and disorderly falls in the Turkish lira (TRY) over the coming days and weeks, causing inflation to rise even further and broader financial conditions to tighten, wrote Tuvey. “Strains would also build in the banking sector and, while it would require a prolonged bout of market stress before a wave of bank defaults became a serious threat, a credit crunch would almost certainly ensue,” he added.

One of most vulnerable

Turkey’s large short-term external debts and low FX reserves mean that it is one of the most vulnerable emerging markets to tighter external financing conditions. 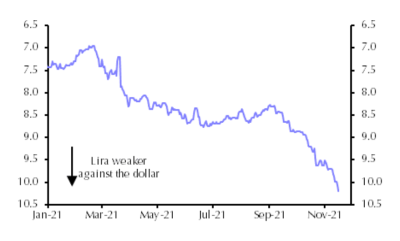 Tuvey assessed that perhaps the greatest threat to Turkey’s economic state is that a sharp tightening of external financing conditions makes it more difficult for banks to roll over their large short-term external debts, which amount to $84bn, or close to 10% of GDP.

“Of course,” he added, “banks have muddled through periods of market turmoil in the past. For example, banks secured wholesale financing at the height of the pandemic-induced market stress last year. And when borrowing costs became prohibitively expensive during the 2018 currency crisis [in Turkey], banks drew down their FX assets held at the central bank as required reserves to meet external debt repayments.

“Banks have rebuilt their FX buffers over the past year and, in the event of a period of financial market stress, they could again draw their FX held at the CBRT [Central Bank of the Republic of Turkey] ($27bn) and/or their FX cash holdings ($8bn). The CBRT could also reduce FX reserve requirement ratios to free up foreign currency. The upshot is that banks would be able to muddle through for a short period as in 2018, but they may struggle to cope if access to international capital markets were to be restricted for a considerable amount of time. Even if this is avoided, banks’ balance sheets would probably shrink and credit conditions tighten.”

A first line of defence for the lira may be a further turn to import compression policies and capital controls, suggested Tuvey. “While we doubt that such policies would prove to be effective, policymakers have resorted to such policies in the past, including large import tariff hikes as well as instructing banks to restrict lira liquidity to foreign investors,” he said.

“Failure to act in a timely and orthodox manner to address investors’ concerns, however, runs the risk of creating a self-fulfilling cycle whereby the CBRT’s unwillingness to tighten policy prompts a further sell-off of Turkish assets (including the lira), raising inflation expectations and further increasing demands for higher interest rates. The result is that the lira weakens at an ever-increasing pace.

“The experience from 2018 is that the currency could experience intra-day falls of more than 10% which, based on the current exchange rate, could see the lira fall well beyond 11/$.”

The TRY has shed 27% against the USD in the year to date. The central bank is expected to cut its key rate to 15% from 16% on November 18, having cut 300bp at its past two monetary policy committee (MPC) meetings, arguing the inflation pressure is temporary.

The "weakening lira is exacerbated by existing extensive economic mismanagement, driven by consolidation of power of President Erdogan," Dennis Shen, director of the sovereign and public sector at Scope Ratings, was quoted as saying by Reuters on November 16.

The selloff "represents a severe problem" given the private-sector's net $124bn in foreign currency liabilities and the government's 58% foreign outstanding debt - "a share that continues rising as the currency depreciates," he added.

The lira’s woes in the past week have been compounded by the dollar firming after higher-than-expected US inflation data.

Belarus expands its use of the death penalty
17 hours ago
The Mariupol siege is over as the last Azov defenders surrender
1 day ago
Kyrgyzstan: Eccentric health minister fights for his job amid claims of corruption and bullying
1 day ago
Azov commanders have remained behind in the Mariupol steelworks to continue the fight
1 day ago
Russia hopes Chinese carmakers will help revive Moskvitch brand
1 day ago