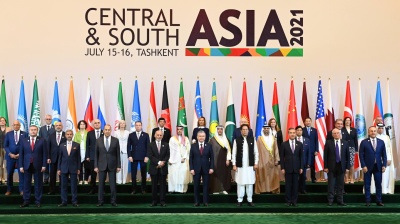 Delegates at the Central and South Asia: Regional Connectivity, Challenges and Opportunities conference in Tashkent.
By Clare Nuttall in Tashkent July 16, 2021

There are large and almost entirely untapped potential economic gains from forging trade, transport and energy links between Central and South Asia. Given its geographic location, Afghanistan is critical to building such links, but the country has been racked by war for decades and has now been plunged back into conflict as the Taliban takes advantage of the withdrawal of international troops to mount a new offensive.

The strong political will in both centre and south of the continent was evident at the Central and South Asia: Regional Connectivity, Challenges and Opportunities conference held in the Uzbek capital Tashkent on July 16. Participating nations adopted a joint statement stressing the importance of the evolution of ties in all areas, not only trade and investment, but also energy, science, tourism and culture.

This can be placed in the broader concept of the restoration of the old silk routes across Central Asia that has been an important theme since the breakup of the Soviet Union. To date, most of the emphasis has been on east-west routes connecting China and East Asia via Central Asia to Europe. However, there were also routes from India to Central Asia through Afghanistan that were in active use until they were severed by the Great Game rivalries of the 19th and early 20th centuries.

“For centuries, the Silk Roads fostered active dialogue between people and civilisations and the sharing of new knowledge, philosophies and ideas,” Uzbek President Shavkat Mirziyoyev told the conference. “Later these were disrupted: obstacles emerged, borders were closed and tensions became more acute. The era of cooperation and understanding gave way to an era of confrontation and mistrust. We are still feeing its negative consequences. There are no effective transboundary routes and trade is poorly developed.”

He told the conference that is “high time” for a revival of ties in this “vast market for services, investments and innovations”.

For landlocked Central Asia — none of the five republics have open sea coasts and Uzbekistan is one of only two double landlocked countries in the world — better connections with South Asia would increase access to international markets. For South Asia such links would provide access to Central Asia’s substantial natural resources as well as opening up new transit routes to Europe via the Commonwealth of Independent States (CIS).

A World Bank paper presented at the conference shows that despite the long history of trade relations between the two regions, current trade — both within and between the regions — is low. Trade between Central and South Asia is estimated at between 0.2% and 4% of total trade to all destinations. Meanwhile, less than 5% of total trade in Central Asia takes place within the region, and in South Asia the figure is just 1.5% — both considerably below the levels in Africa, the Middle East, Latin America and Southeast Asia.

World Bank research puts the current level of trade between Uzbekistan and Pakistan at just 0.2% of theoretical potential, though the appetite for closer economic relations was illustrated by the signing of $500mn worth of deals between businesspeople from the two countries at a forum on the sidelines of the main conference.

The link between Central and South Asia is, of course, Afghanistan. The years of violence, instability and all out war in the country have divided the Central Asian republics to its north (Afghanistan borders Tajikistan, Turkmenistan and Uzbekistan) from Pakistan and other South Asian countries.

“The situation in Afghanistan and other outstanding disputes have been keeping the region fragmented for decades. Afghanistan is the natural land bridge between Central and South Asia and peace in Afghanistan remains critical,” commented Pakistani Prime Minister Imran Khan at the conference.

The event took place amid an eruption of violence as Taliban forces advance in the wake of the withdrawal of US and international troops, taking over areas including some that border Central Asia. The country had already been weakened by severe drought and a third wave of the coronavirus pandemic.

Afghan President Ashraf Ghani talked of the “destructive wave of attacks across the country” launched by the Taliban, which have forced hundreds of thousands of people to flee their homes. “We in the government of Afghanistan are determined to ensure our existence as a nation and a state … We are prepared to face the Taliban and their supporters for as long as it takes until they realise a political solution is the only way forward,” he told delegates. The heightened tensions in the region became evident in a verbal clash between Ghani and Khan over the role of Pakistan in dealing with the Taliban.

EU high representative Josep Borrell said the vision of regional connectivity is “facing a massive and urgent challenge”. “I am of course referring to the current developments in Afghanistan. A peaceful and stable Afghanistan is crucial to the stability and development of the whole region,” he said. “Connectivity can be an essential building block for jobs, development and peace in Afghanistan, but today unhappily we are witnessing a different reality.” This has implications for the whole region as Afghanistan descending into chaos would lead to a surge in drug trafficking, the spread of radical ideologies and violence.

The conflict in Afghanistan is not the only issue impeding the development of regional ties. India and Pakistan remain divided over the disputed territory of Kashmir. On the other hand, since he came to power in Uzbekistan, Mirziyoyev’s foreign policy priority has been to repair relations with the country’s neighbours.

While acknowledging that the conflict in Afghanistan makes building regional links more difficult, speakers including the Uzbek president were hopeful that the promotion of regional trade, bringing prosperity, new jobs and higher living standards in its wake, would contribute to lasting peace and stability in the region; there was consensus that a solely military solution to the violence in Afghanistan is not an option.

“One of the key links between Central and South Asia is the Islamic Republic of Afghanistan. We are convinced that our inter-regional partnership will become important factor in restoring peace and stability in the country,” Mirziyoyev said. “Our priority is to create conducive conditions for trade and economic ties, and growth of mutual investments.”

One notable step was the start of construction of the CASA 1000 transmission line that will transport surplus electricity from hydropower plants in Kyrgyzstan and Tajikistan to Afghanistan and Pakistan, traversing a distance of 1,270km. Another major project spanning multiple countries in the regions is the Turkmenistan-Afghanistan-Pakistan-India (TAPI) gas pipeline.

The planned trans-Afghan railway is a 573-km line planned to connect Tashkent with the Afghan capital Kabul and Pakistan’s northern city of Peshawar, as agreed between the leaders of the three countries at the beginning of this year. Tatiana Proskuryakova, the World Bank Group’s regional director for Central Asia, told the event that “to fulfil the project will require significant investment, also managing security risks, but if this is done there is no denying what it can bring to this region.”

The railway will help address the issue of the lack of physical infrastructure connecting Central and South Asia: the World Bank paper notes that current trade “reflects the continuing dominance of the post-Soviet trading network, particularly the rigid north-south rail networks of Central Asia which do not extend into South Asia”.

Equally important, however, are “soft” measures to remove tariff and non-tariff barriers to trade, which increase transport times and push up costs. World Bank research shows the cost to ship a container from Kazakhstan, Kyrgyzstan, Tajikistan or Uzbekistan to Rotterdam and Shanghai is around three to five times as high as from other post-socialist countries.

“These countries have been united for many centuries and yet today we see the trade between the two regions is very much sub par  … clearly we are very far below potential for connectivity and trade,” said Proskuryakova. “Infrastructure investments alone don’t yield the results. Soft measures are needed.”

There is also the context of a global re-think of supply chains, initially prompted by the trade wars between the US and China and later accelerated by the disruptions to global trade stemming from the pandemic. This has led companies in Europe, for example, to consider ways to shorten their supply chains, such as switching from Asian suppliers to those in closer countries. Asian countries that are deeply involved in manufacturing for international export markets are vulnerable to such changes, creating an incentive to look for new partners closer to home.

The Central Asian republics, meanwhile, face a different set of challenges, mainly related to their landlocked location. Moreover, as the World Bank report showed, trade between the two regions is not just below potential, in some cases it is also limited to a relatively small range of commodities, with a great deal of room to diversify. Politicians from both Central and South Asia saw much to be gained from opening up their options.

Academic sheds light on Rahmon regime’s attempts to crush the Pamiris
COMMENT: Does Russia have any friends left in Southeast Asia?
bneGREEN: Zero-carbon housing a key battleground for climate change