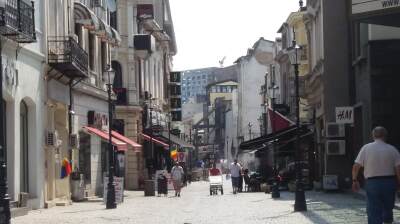 The EBRD’s latest set of forecasts show that the contraction in countries in emerging Europe was smaller than expected in 2020.
By Clare Nuttall in Glasgow July 1, 2021

Economists warned over inflation and rising debt as well as the uneven recovery across developed countries, emerging markets and developing economies at a panel organised by the European Bank for Reconstruction and Development (EBRD) on June 30.

While Hungary, Czechia, Russia and Ukraine have already raised interest rates – the two Central European nations being the first in the EU to do so – other central banks across the region and elsewhere face tough decisions on when to cut rates to rein in inflation at the cost of slowing the recovery.

EBRD chief economist Beata Javorcik told the panel this is “quite a test” for central banks, because “it is never easy to figure out when the right moment is to put a break on recovery to stop build-up of inflationary expectations.”

She also expressed concern that central banks will come “under political pressure to keep rates low and will miss the point where inflation expectations start rising”, with potentially serious social consequences. In the region “people remember hyperinflation of the 90s”.

This is potentially a problem in emerging Europe where, as Javorcik pointed out, many of the central banks are just a few decades old rather a century or more. “The key question is: will central banks be able to maintain the trust of the public that they will act when action is needed. A reputation takes a long time to build; you can destroy it in a millisecond. … if central banks lose their reputations we are in for a long period of high inflation,” she said.

Carmen Reinhart, vice-president and chief economist of the World Bank Group, agreed that she doesn’t “envy central banks, especially in emerging markets and developing countries, because they are doing a tough balancing act”. Specifically, central banks’ ability to act counter-cyclically “is now being tested by sharp increases in inflationary pressures. We want to get the recovery going but the inflation question has very deep social ramifications, especially food price inflation.”

The rise in inflation is partly due to short-term factors such as currency depreciation, the bounce-back in commodity prices and pent-up demand. There are also factors in emerging Europe predating the pandemic such as the double-digit inflation in Turkey and the hot labour markets in Central Europe.

Gita Gopinath, economic counsellor and director of research at the International Monetary Fund (IMF), commented that the current situation is “unlike everything the world seen before”. She pointed to the supply/demand mismatch that is putting pressure on deliveries, the labour mismatch where people are claiming unemployment benefit but jobs are vacant because of issues such as health risk and childcare. These are “unique features feeding into inflation”, though, she noted, “a lot of the sources are transitory. We have reason to believe numbers will come back down by next year.”

No financial crisis – yet

One positive is that so far, as Gopinath pointed out, there has not been a financial crisis along with the health crisis. However, she warned it’s possible that debt relief or restructuring may be needed in future.

Gopinath stressed that with the delta variant “spreading ferociously” the pandemic is far from over.  “Delta is creating disastrous outcomes in places where vaccination rates are incredibly low. We are seeing a diverging recovery. We have been flagging this for six months now and for every month of data we have this picture looks worse.”

For all countries to get to vaccination rates of at least 40% by end 2021 and 60% by mid-2022, countries that have procured more vaccines than they need – there is a surplus of around 2bn – will have to share them, Gopinath said. “We don’t have the luxury of time; It has to be done over the next six months.”

The IMF economist also pointed to the differences in financial resources. “In the pandemic we seen rich nations able to simulate and protect their economies. $16 trillion has been spent in the crisis, the overwhelming majority in advanced economies. Emerging markets and low-income countries are having a hard time doing the expenditure needed. They are far more constrained fiscally and this is going to get worse.” As well as stimulating the economies and increased spending on healthcare, Gopinath argued that governments will need to invest to correct problems related to lost education; “the hit to human capital has been severe,” she said.

Moreover, it is premature to talk of the crisis being over. “The pandemic has been driving the economic cycle, and for the countries that depend on normalisation of tourism, their downturn is not over until this is over at a global level,” warned Reinhart. Even when recoveries get underway, she cautions against a premature withdrawal of monetary, fiscal and financial support stimulus.

Pointing to the huge financing needs across most of the wold, Reinhart said: “We need the wheels of finance to work well to ensure a recovery. The situation is very, very uneven between developed, emerging markets and developing countries. It is regressive across and within countries. The countries where poverty rates are spiking, where living standards from education to food security are deteriorating the most, are where you already have a build-up of sovereign debt problems, and that will hamper their ability to continue to support the recovery.”

The EBRD’s latest set of forecasts in its Regional Economic Prospects report published on June 29 show that the contraction in countries in emerging Europe was smaller than expected in 2020, and, as Javorcik noted, the region outperformed the world as a whole by around 1 percentage point. “To a large extent this was driven by the greater share of manufacturing in their GDP,” explained Javorcik. Those countries that suffered the deepest declines in GDP were mainly those with large tourism sectors.

Javorcik said she is “cautiously optimistic” about recovery this year, while warning of risks such as vaccine shortages – Hungary and Serbia have some of the world’s highest vaccination rates but only small numbers have been vaccinated in parts of Eastern Europe, Central Asia and the Caucasus – while vaccine scepticism is also slowing down the process, notably in Russia.

When it comes to supporting economies through the crisis, Javorcik noted that “our countries have been very fortunate to be able to borrow, and with a few exceptions saw very limited increases in the cost of borrowing last year.” However, she added, “we shouldn’t be taking debt sustainability for granted because we know from the past episodes that when global interest rates go up suddenly, investors start paying more attention to fundamentals and country risk is reflected to a much greater extent in borrowing rates.”

EBRD 2022: Russia and the war in Ukraine dominate the EBRD’s annual meeting

CONFERENCE CALL: Invasion of Ukraine would threaten the delicate balance of interests in the Arctic

CONFERENCE CALL: A chance for Moldova and its biggest bank

EBRD 2022: Russia and the war in Ukraine dominate the EBRD’s annual meeting
CONFERENCE CALL: Invasion of Ukraine would threaten the delicate balance of interests in the Arctic
CONFERENCE CALL: A chance for Moldova and its biggest bank

Reflections from our correspondents attending conferences around the Central and Eastern Europe/Commonwealth of Independent States region.