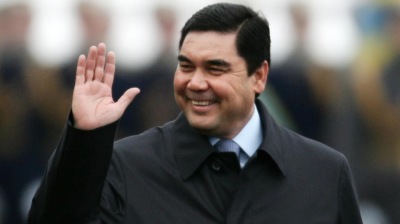 President of Turkmenistan Gurbanguly Berdymukhamedov was in Milan to woo foreign investors as he needs to diversify the economy
By Mark van Loon in Milan November 8, 2019

The President of Turkmenistan Gurbanguly Berdymukhamedov was in Italy this week for an Italian – Turkmenistan business forum took in Milan on October 7, organised by the Italian Trade Agency and the Turkmen Ministry of Foreign Affairs. Representatives of Turkmen industry, including oil & gas, agriculture and chemicals, held presentations and met with their Italian counterparts.

Turkmenistan doesn't get out of house much and that shows in its trade profile. Last year the trade turnover between the two countries totalled €78m growing to €96m the first half of 2019, making Italy Turkmenistan’s 14 largest trading partner. This compares to the €166m trade turnover with Germany (7), €407m for Russia (3) and €7.2bn with China (1).

However, there is some confusion over just what the trade numbers are as the these numbers are according to Italian sources, whereas the Turkmen State Statistics Committee puts the turnover significantly higher: Turkmen-Italian trade turnover was €2bn in 2018 according to the official Turkmen numbers, making Italy the country’s second most important trade partner after China. But perhaps this was just for the occasion.

Assuming the Italian statistics are correct, this is quite a low figure given the presence of a number of Italian large and mid-sized companies that are active in Turkmenistan, mainly in the oil & gas, o&g equipment and engineering sectors.

And these numbers are down substantially from the last few years. As Ashgabat is becoming aware that its stumbling economy needs diversifying, the diplomat-in-chief, President Berdymukhamedov, has been on the road a lot lately promoting trade with his country. After Japan and Azerbaijan late October, he descended on Rome this week.

And despite the country’s closed nature foreign companies are interested thanks to its abundant hydrocarbon resources. In Milan, larger players such as ENI and CNH Industrials that have been present in the country for a while were in attendance. Additional focus was on other sectors in Turkmenistan that could use international investments. Italian members in the audience represented SME’s in sectors such as engineering, oil services, textile and consumer goods. Most are not yet in this market or left after import controls were put in place, but they are keen to keep up contacts in case things change. Some had meetings with Turkmen companies on the side-lines of the conference.

Enthusiasm is held back by concerns about non-payment after projects are finished. A shortage of foreign currency has caused problems for local companies to fully compensate their business partners and Turkish, German and Russian counterparties have sued the government for non-payment. Anticipating these worries, Italian export credit company SACE presented ‘risk-management’ solutions at the forum, with a special focus on SME’s.

And many participants had come to the conference hoping for some news on the country’s major new energy infrastructure project, the Turkmenistan-Afghanistan-Pakistan-India (TAPI) pipeline project. BU their hopes were dashed by only a very general presentation by Muhammetmyrat Amanov, CEO of TAPI Pipeline Company and son-in-law of the President.

TAPI will bring gas from the giant Galkynysh field in eastern Turkmenistan to the Indian market via Afghanistan and Pakistan, opening up a new gas export vector in the process, but progress on the Turkmen part of the pipeline is shrouded in mystery.

A Turkmen official gave private assurances that the 200km Turkmen section of the 1,814km pipeline is finished. But according to an Italian oil official present in Milan only 40km of the Turkmen section is now laid with the timing of the remaining work remains under a question mark.

As ever with Turkmenistan, nothing is ever straightforward.