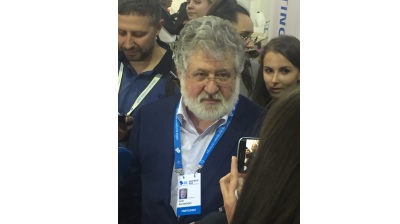 The relationship between oligarch Ihor Kolomoisky and President Volodymyr Zelenskiy is the main question hanging over Ukraine's investment case.
By Ben Aris in Kyiv September 13, 2019

Investors and political celebrities made their way to Kyiv this week for the annual Yalta Economic Summit (YES) hosted by top Ukrainian oligarch Victor Pinchuk. But worryingly as the delegates sipped champagne and nibbled on canapés Ukrainian police were raiding the office of PrivatBank and the home of former National Bank of Ukraine (NBU) governor Valeria Gontareva. Ukraine’s new President Volodymyr Zelenskiy has gotten off to a good start as the newly elected parliament passed a blizzard of long overdue legislation in just its first two weeks on the job, but the direction of the Zelenskiy government is still not clear.

Special forces police raided PrivatBank's headquarters in Dnipro with a search warrant issued by a district court in the eastern Ukrainian city, according to a PrivatBank press release. Police were reportedly investigating whether bank officials had exceeded their authority in concluding agreements with domestic and international recruitment and consulting companies.

The raid is the latest in a series of attacks related to the nationalisation of PrivatBank in 2016 that was partly prompted by a bne IntelliNews cover story Privatbank investigations that detailed the extent of related party lending by the bank to shell companies controlled by its owner oligarch Ihor Kolomoisky. In the ensuring scandal it transpired that the bank had been emptied of its deposits by these scams and there was a $7bn hole in its balance sheet. Gontareva nationalised the bank two months later.

Now that Zelenskiy is in complete control of the government Gontareva and the bank have been subject to a string of incidents that could simply be coincidence. Gontareva was knocked down by a car in London last month, then her daughter-in-law’s car was doused in petrol and torched two weeks later. The reasons for the raid on Privatbank have not been explained by the new government.

"I'm rather worried about what's happening," the secretary of Ukraine's National Security and Defence Council Oleksandr Danylyuk told reporters on the sidelines of YES, the first comment by anyone in the new government on the raid. Danylyuk was finance minister at the time of PrivatBank’s nationalisation and instrumental in the government's decision to take the bank over.

A week earlier the attacks on Gontareva and her family prompted the NBU to issue a statement calling on the government to protect its staff and former employees. Gontareva accused Kolomoisky of being behind the attacks in an email sent to bne IntelliNews from her hospital bed in London. “It's revenge,” she said, adding to her earlier comments to bne IntelliNews in London before the car accident when she said she feared for her safety. British police are investigating the incident and suspect foul play.

Kolomoisky remains at liberty and indeed has launched a slew of lawsuits in an effort to undo the nationalisation and take back control of the bank. The police raided PrivatNank in connection to some PR deals, but Kolomoisky is not under investigation and returned to Ukraine after five years in exile shortly after Zelenskiy was elected. Last week Kolomoisky had his first public meeting with Zelenskiy where they discussed “business”, although no further details were released.

“I have a good relation with the president. That’s all,” Kolomoisky told bne IntelliNews in comments on the sidelines of the YES conference where he appeared to the surprise of many commentators, but refused to elaborate.

Kolomoisky has been very vocal, and given many interviews to the press where he has offered his opinion on reforms and senior appointments in the government. He even controversially suggested that Ukraine default on its IMF debt.

While the Zelenskiy government is off to an encouraging start, the question of Kolomoisky’s relationship to the president remains the biggest question mark hanging over the new regime. The raids on PrivatBank, Kolomoisky’s welter of law suits against the NBU and the physical attacks on Gontareva all make this question mark more daunting. 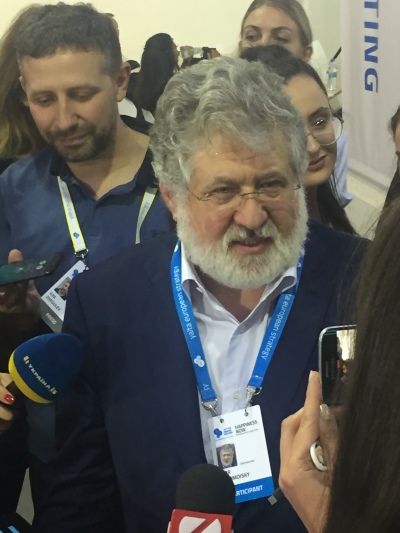 Ukraine has proven to be hard to invest into as the politics have been so unpredictable in the past.

“There is definitely a lot of interest in Ukraine at the moment,” one private equity fund manager told bne IntelliNews. “But it is still too early to say if there has been a real change and if it is worth investing. There is still no new private equity investment coming into Ukraine.”

“Three of Estonia’s biggest investors put money into Ukraine before, but they all lost money,” Aivaras Abromavicius, CEO of Ukrainian defence company Ukroboronprom, told bne IntelliNews. “Investors need to make money and when they don't that's bad for the country as word gets out and it puts off the other investors.”

Abromavicius is on the front line to transform Ukraine’s investment story. A former economics minister, Abromavicius very publically quit accusing then president Petro Poroshenko of foisting his placemen on the economics ministry and said it was impossible to make reforms in the face of rampant corruption in the ruling administration. At his new job Abromavicius has taken on one of the most corrupt institutions in Ukraine.

“It's a huge task and it’s going to be very difficult. But I like a challenge,” Abromavicius told bne IntelliNews wryly, adding that his first task will simply been imposing some transparency on the state-owned behemoth and improving reporting and accountability.

Foreign direct investment (FDI) is already rising but the main investment arriving in Ukraine is still into the local bond market, which has attracted some $3.5bn in just a matter of months since the market was hooked up to the Clearstream international payments and settlements system – a reform that has been hailed as an outstanding success.

The yields on local bonds started this year at around 19% but have sunk an extraordinary 500 basis points since then.

“The government has raised a lot of money but now the Ministry of Finance has changed its tactics,” Mykhaylo Demkiv, an analyst with the ICU investment bank in Kyiv, told bne IntelliNews. “Over the summer it was selling everything it could, but now it has slowed down and now is only offering bonds with a longer maturity of around five years as it hopes to get into the portfolio of insurance companies and the like. At the same the yields are being squeezed lower. The local bonds have been an excellent investment but the conditions are getting tighter now.”

The economy is picking up and put in a surprise 4.6% growth in the second quarter, but for the economic growth to really accelerate to the 7% a year the government is targeting, Ukraine will need a lot more FDI and private equity investment and for those investors the jury is still out on Ukraine’s prospects.