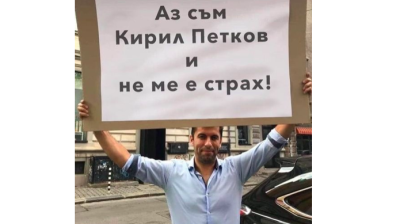 After Constitutional Court ruling, Kiril Petkov holds a banner declaring: "I am Kiril Petkov and I am not afraid".
By Denitsa Koseva in Sofia October 27, 2021

Bulgaria’s constitutional court ruled on October 27 that Kiril Petkov, currently one of the country’s most popular politicians, had dual citizenship while serving as caretaker minister, which is in violation of the law.

Petkov had Bulgarian and Canadian citizenship, which, according to Bulgarian legislation, does not allow him to take public positions. He says he asked Canada to terminate his citizenship in April, prior to becoming caretaker minister. However, the document approving his request was only issued on August 20.

The decision comes ahead of the November 14 general election and might lower the support for Change Continues, political project of Petkov and his fellow colleague Assen Vassilev, who was a caretaker minister at the same time.

Change Continues is seen as a strong competitor of Gerb, which ruled Bulgaria for a decade, and also as a possible mandate holder. Petkov is widely expected to become prime minister should his formation manage to form a coalition.

The court ruled that the order of President Rumen Radev on the appointment of the government in mid-May violated the constitution when it appointed Petkov as caretaker economy minister.

“I, Kiril Petkov, accept the decision of the Constitutional Court. I stand with head held high in front of you and I declare: When I signed my declaration of resignation before the notary on April 21, I handed over my Canadian passport, paid the fee, and I was sure that I had fulfilled my obligation to the constitution of Bulgaria. Giving up a Canadian pension, free health care, the opportunity to travel and work around the world was not a difficult decision for me, because I knew I had a debt to my homeland,” Petkov said in an emotional statement on the Facebook page of his political project, Change Continues.

He accused the constitutional court of making a “controversial decision”, pointing out that several years ago the same court allowed the controversial businessman and politician Delyan Peevski to serve as an MP and head of the national security agency at the same time, which some experts suggested did not correspond with the law.

Petkov also suggested that it wasn’t a coincidence that the court ruling came at the peak of the campaign for the general and presidential elections, in an attempt to influence the vote.

Petkov has repeatedly claimed that Bulgaria’s constitution and laws do not specify the exact moment when a dual citizenship is terminated. The October 27 ruling of the constitutional court is based on the presumption that the dual citizenship ends on the date when this is confirmed by the authorities of the respective country.

The court did not specify whether Petkov’s acts as economy minister were illegal, but far-right VMRO said it will file a claim against all his decisions with the Supreme Administrative Court.

Earlier in October, the specialised prosecution said it was also probing the issue of Petkov’s Canadian citizenship. The decision was seen as an attempt to compromise Petkov after he set up Change Continues along with Vassilev.

According to the latest polls, Change Continues would rank second or third after Gerb, but has the potential to increase its support. Analysts have noted that the citizenship issue and the expected response of the constitutional court a few days ahead of the November 14 snap vote could lower the support for Change Continues but, as Petkov and Vassilev are highly rated, it might also not affect the number of voters casting their ballots for their party.