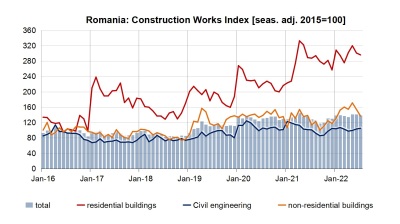 The seasonally-adjusted construction activity index in Romania edged down by 1.2% m/m in July, but it remains close to the typical level achieved this year — nearly 5% above the last year’s average level.

In July, the construction volume index rose by 6.7% y/y, driven up by the activity in the non-residential buildings segment (+18.1% y/y), the most active this year compared to 2021.

For the whole January-July period, the construction volume index rose by 4.7% y/y, with the non-residential segment up 16.3% y/y.

The shrinking profitability is expected to impact the activity volume eventually.

For instance, the Romanian industrial group TeraPlast, which is mainly involved in construction materials manufacturing, suspended a residential project citing the prohibitive cost of inputs.

TeraPlast put on ice plans to develop a residential project on the site of a relocated factory, in the central part of Bistrița city.

Ironically, company cited the increase in the prices of construction materials, combined with the accelerated evolution of energy costs and fuels.

TeraPlast had already reached an agreement with Alfa Construct Partners on the project, but the two parties suspended the agreement. TeraPlast said it has not abandoned the idea of such an investment, but postponed it for the time being. At the same time, the company said it remains open to selling the land along with the project, which has all the building permits.

bneGREEN: Fit for 55 – not fit for purpose
More pain stored up for Emerging Europe in 2023
French Alten takes over Romanian tech firm Qualitance

Russia’s industrial output decline slows to only 0.1% in August
1 day ago
Poll shows Putin's popularity took hit in September but remained as high as 77%
1 day ago
Russia on track to have a record-smashing grain harvest
3 days ago
Bosnia posts annual CPI inflation of 16.8% y/y in August
3 days ago
IMF sees Romania’s economy growing by 4.8% in 2022, analysts are even more bullish
4 days ago