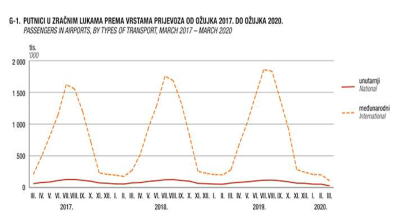 The number of people travelling through Croatia’s airports showed a 61.5% year-on-year drop to 133,000 people in March, according to data from the Croatian Bureau of Statistics (DZS).

“The circumstances brought about by the COVID-19 epidemic have directly influenced the decrease in the traffic of passengers in Croatian airports,” the DZS said in a statement on May 14. Croatia imposed a lockdown to contain the virus in mid-March.

Air passenger numbers are highly seasonal in Croatia, which is a popular destination for summer sea, sun and sand breaks. Numbers are typically low in the winter months, before rising sharply during the spring and peaking in July and August.

The DZS also released data on port traffic that showed a 12.3% decrease in the number of people who embarked or disembarked n the first quarter of the year, to just under 2.6mn, the lowest level in the last five years. Again, this was a result of the coronavirus (COVID-19) pandemic and travel restrictions.

Goods traffic via Croatia’s main ports decreased by 11.0% compared to the same period in 2019, though there were modest increases in traffic via the ports of Rijeka and Split.

The seasonally adjusted IHS Markit Russia Services Business Activity Index registered 47.8 at the end of the second quarter, up notably from 35.9 in May, Markit said in a press release on July 3.

Global tourism sector set to lose between $1.2 trillion and $3.3 trillion depending how long travel restrictions last, the UN’s trade and development body forecast.

Foreigners bought €169.99mn of property in the tiny Adriatic country in 2019.

IHS Markit points to the challenging business environment in the manufacturing sector as demand and capacity utilisation remained weak amid the ongoing coronavirus crisis.

Net foreign direct investment leaving Ukraine in 1Q20
15 hours ago
Russia Services PMI bounces back to 47.8 in June, up from 35.9 in May
2 days ago
Croatia to be among countries worst hit by tourism collapse this year, says UNCTAD
3 days ago
Russians, Serbians, Turks the biggest property buyers in Montenegro
3 days ago
Polish PMI advances but remains below 50 points as restrictions lifted
4 days ago