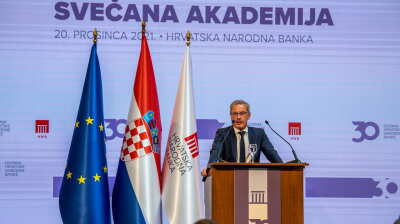 The Zagreb prosecution and state financial regulator HANFA are probing alleged trading in shares of banks supervised by the National Bank of Croatia (HNB) by senior officials from the central bank.

The probes were launched following local media reports that the central bank’s management might have breached regulations by using insider information.

A statement from HANFA did not name the suspects, but the HNB mentioned central bank governor Boris Vujcic, his deputy Sandra Svaljek and other employees in its own statement on the probe.

HANFA has said it had launched a probe to establish whether staff at the central bank had traded in securities of commercial banks based on insider information in violation of the Market Abuse Regulation and the Capital Market Act.

According to local news outlet Index.hr, over the past 20 years more than 40 central bank employees traded in bonds of banks regulated by the central bank. The trades involved more than 400 transactions worth more than HRK10mn (€1.3m) in total. The information was based on publicly available documents from the Central Depository and Clearing Company (SKDD).

The central bank issued a statement on January 13, denying any wrongdoing by its management or employees.

“Taking into account the fact that the topic of the sale of shares, bonds and other securities of banks is of legitimate public interest, especially if the purchase or sale is being carried out by the leaders and employees of the institution that supervises the operations of these banks, the Croatian National Bank wants to inform the public that HNB governor Boris Vujcic, deputy governor Sandra Svaljek and other employees have acted in accordance with regulations and ethical standards which were in force at the time of taking certain actions, and that according to the data known so far, there is no indication that they have used some inside information,” the central bank said in a statement.

Vujcic acquired shares of Rijecka Banka and Zagrebacka Banka before becoming a member of the HNB council, or taking up the position of governor or deputy governor. At that time there were no regulations prohibiting or restricting the acquisition of shares of a Croatian bank. Vijcic sold the shares in 2001, although no regulation or ethical principle obliged him to do so, the HNB noted.

Svaljek bought Erste & Steiermärkische Bank d.d. corporate bonds at the end of 2012, at a time when she was an external member of the HNB council. She acquired the shares using publicly available information, included in the bond issuer's prospectus, approved by HANFA.

“There was no regulation or ethical standard prohibiting or restricting the right to acquire bank bonds to members of the CNB Council. Sandra Svaljek held these bonds for five years, i.e. until the maturity in 2017, as contracted, and was then neither a member of the Council nor an employee of the HNB,” the central bank said in the statement.

At the time when the two bank leaders acquired shares or bonds of local banks, Croatia was not yet a member of the European Union and did not have any internal regulations that would make their actions illegal, the central bank said.