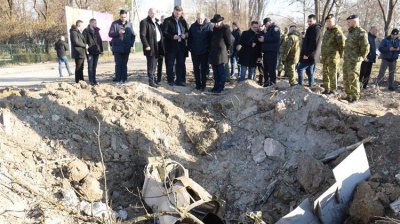 A drone flying from the war in Ukraine crashed in Croatia on March 11, causing consternation among the authorities, who accused Nato of failing to do its job.

The drone appears to have flown over several Nato member states to crash in the Croatian capital Zagreb, triggering a loud blast and damaging parked cars but causing no injuries, authorities said Friday.

The drone is of military design and Soviet-made, but it is not known whether it beloned to the Russian or Ukrainian military, Prime Minister Andrej Plenkovic told reporters as quoted in a statement.

The drone flew over Hungary, entering from Romania. Hungary, Romania and Croatia are all members of Nato and the incident raised questions about air surveillance and air defense capabilities of the alliance.

"Why it happened, was it due to an error or loss of control, we cannot say for sure at this moment, but we do know that the drone was flying over Croatia for several minutes before crashing down in Zagreb," Plenković said.

Defence Minister Mario Banozic said that the incident was not a threat to Croatia and that the homeland security system did not fail.

The chief of the general staff of the Croatian armed forces, Admiral Robert Hranj, said that an investigation was underway.

"Right now we cannot say who the drone belongs to. It is relatively old-fashioned and was used in the Soviet Union. Without a detailed analysis I cannot say whether it flew in from Ukraine," Hranj said.

The drone flew over Croatia for seven minutes before crashing.

Ukraine’s authorities have said they did not launch the drone.

“The drone that crashed in the capital of Croatia does not belong to Ukraine,” Ukrainian defence minister's adviser Markiyan Lubkivsky said as quoted by N1.

“This drone did not have Ukrainian markings, it had red stars on it. This is not a Ukrainian drone,” Lubkivsky added.

The object was identified as a TU-141 drone which has recently been used as a training target. Both the Ukrainian and Russian militaries had used such drones.

Interior Minister Davor Bozinovic said that "by all accounts Croatia should not have been the final destination of that drone."