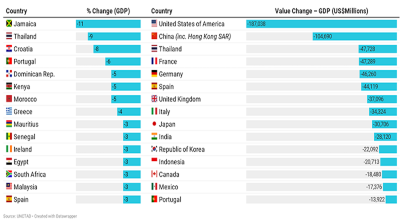 Croatia is among the top three countries worldwide whose GDP is forecast to suffer the most from the collapse of the tourism sector this year, says a new report from the UN’s trade and development body UNCTAD.

Globally, the tourism sector could lose at least $1.2 trillion, or 1.5% of the global gross domestic product (GDP), after already experiencing almost four months of shutdown as a result of the pandemic.

If the break in international tourism lasts for eight months, the loss could be as high as to $2.2 trillion, or 2.8% of the world’s GDP, UNCTAD forecasts, based on the expected decline in tourism as projected by the UN World Tourism Organization (UNWTO).

Under the most pessimistic scenario of a 12-month break in international tourism, losses would reach $3.3 trillion, or 4.2% of global GDP.

“Tourism is a backbone of many countries’ economies and a lifeline for millions of people around the world, having more than tripled in value from $490bn to $1.6 trillion in the last 20 years, according to UNWTO. But [coronavirus] COVID-19 has brought it to a halt, causing severe economic consequences globally,” says the report.

“Prevailing lockdown measures in some countries, travel restrictions, reductions in consumers’ disposable income and low confidence levels could significantly slow down the sector’s recovery. Even as tourism slowly restarts in an increasing number of countries, it remains at a standstill in many nations.”

The two worst affected countries are expected to be Jamaica and Thailand, which are forecast to lose 11% and 9% of GDP respectively under the most optimistic scenario. Croatia follows with an 8% contraction under UNCTAD’s moderate scenario.

Other badly affected economies include the southern European nations of Greece, Portugal and Spain, as well as other tourism hotspots such as Kenya, Egypt and Malaysia.

“Travel and tourism account for a significant share of global GDP and more than half of many countries’ national income,” says the report.

“Coronavirus-induced losses in tourism have a knock-on effect on other economic sectors that supply the goods and services travellers seek while on vacation, such as food, beverages and entertainment. UNCTAD therefore estimates that for every $1mn lost in international tourism revenue, a country’s national income could decline by $2mn to $3mn.”

Tourism is a major employer in countries such as Croatia, where UNCTAD forecasts a fall in unskilled employment of between 12% and 22%, and a fall in skilled wages of between 9% and 17%.

Croatian tourist activity just over half of 2019 level in July