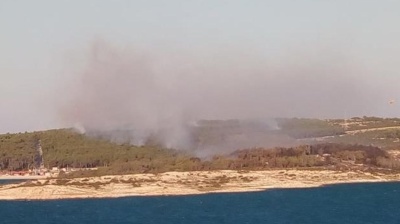 Hundreds of people were evacuated from the Fresh Island music festival on Croatia’s Zrce Beach on the night of July 15 after a huge forest fire broke out.

Police stepped in to escort buses of festival goers out of the area after the road to the nearest town, Novalja, was closed due to the fire.

A July 16 statement from the Croatian interior ministry, issued at 1.15pm local time, said the fire was still active but no longer presents a threat to people or buildings.

Later in the day, the festival organisers said the event had been cleared to continue. "GREAT NEWS! The emergency services have now cleared the fire, reopened the road and deemed the route and Zrce Beach to be safe. Shuttle buses are also running as scheduled from Novalja," the organisers tweeted on July 16.

"We are therefore pleased to confirm that Fresh Island will continue as planned with no further disruptions, starting with Tim Westwood’s pool party at 4pm in Papaya."

The fire broke out a few weeks after a heatwave across Croatia and much of Europe in late June. Forest fires are expected to become more frequent in Croatia and other Mediterranean countries as global temperatures increase.

Croatia has made considerable progress over the last five years, but the authorities need to prepare for a future global downturn as well as continue the catch-up with fellow EU member states, said ... more

The European Commission (EC) recommended that Croatia join Schengen after meeting the conditions to join the border-free area, the EC said in a statement on October 22.  Croatia is the EU’s ... more

More than 80% of Croatia’s primary and secondary school teachers went on strike on October 10 after talks on pay with government officials broke down.  Union leaders said 85% of secondary ... more