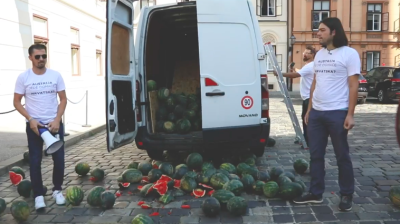 MEP Ivan Vilibor Sincic (right) and a fellow protester empty a van of watermelons outside the Croatian government building.
By bne IntelliNews September 10, 2020

Croatian MEP Ivan Vilibor Sincic dumped dozens of watermelons outside Government House in Zagreb as part of a protest to raise awareness about the situation of local farmers.

Farmers in Croatia complain that since the country joined the European Union local food producers have been undermined by cheap imported food.

Sincic and other protesters outside the government building on September 10 said the watermelons they threw down were meant to symbolise the watermelons and other fruit and vegetables farmers would have to plough under or destroy because they were unable to sell them.

Sincic delivered an address to the small crowd through a loudhailer from on top of the van, and fellow demonstrators accosted members of the government as they entered the building.

“Every year, thousands of tonnes of domestic products fail in Croatian fields. Our struggle must be for our country, for our children, for our people,” Sincic wrote on his Facebook page.

Croatian government officials were quick to criticise Sincic. Agriculture Minister Marija Vuckovic dismissed the protest as “theatre”. Deputy Prime Minister and Minister of the Interior Davor Bozinovic said that “no one expected that something resembling a security threat would come from a politician”.

"Certainly this is not a good picture, especially for those who are politicians and MPs and who express their political position in this way. We are a democratic state, but in a democracy there must be rules," Bozinovic added.

Prime Minister Andrej Plenkovic has already said that a security plan will be drawn up for the area outside the government building.

Sincic, who is just 30 years old, was one of the founders of the Zivi Did (Human Shield) anti-eviction movement, whose members occupied properties to prevent foreclosures. A party of the same name was founded in 2011, and Sincic is its chairman. He ran in the 2014 presidential election, coming third after the candidates for the two main parties, and went on to successfully run first for the Croatian parliament and later to become an MEP.

Gaming giant Stillfront buys Croatia’s Nanobit for up to $148mn