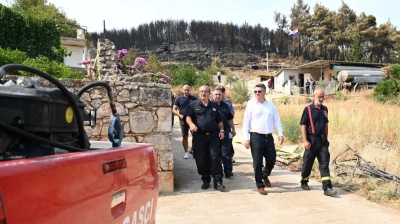 President Zoran Milanovic made the controversial comments during a visit to firefighters on the island of Hvar. / Croatian presidency
By bne IntelliNews August 9, 2022

Croatian President Zoran Milanovic argued on August 8 that Western sanctions have harmed Croatia and are not effective against Russia.

An EU and Nato member, Croatia imposed sanctions on Russia following the invasion of Ukraine in February. However, Milanovic has taken a softer stance towards Moscow than the government led by Prime Minister Andrej Plenkovic.

"There is no response from the West, nothing at all... we have sanctions that are not working, it will not harm Russia, if that is the goal … and what happened, it harmed us," Milanovic said during a visit to Hvar, reported news agency Hina.

Milanovic’s position on Ukraine was questioned even before the start of the war, when he criticised Plenkovic’s visit to Kyiv in late 2021, and went on to inflame the situation when he said on January 25 that Croatian troops would not be involved in a possible escalation of tensions between Russia and Ukraine. Ukraine’s place is not in Nato, the Croatian president added.

Plenkovic was quick to point out that his statement did not represent Croatia’s official position. Ukraine’s foreign ministry responded by summoning the Croatian ambassador to the country to lodge a complaint about Milanovic’s words. A few days later, it emerged that Milanovic has been included in an online list of enemies of Ukraine compiled by the Myrotvorets website.

Since then, the long-time political opponents also argued in March over a decision by Milanovic to ban military flights above the capital Zagreb and other cities. More recently, Milanovic said he wanted to block Nato membership for Sweden and Finland, calling it a “very dangerous adventure”.

Milanovic is not the only one to question the effectiveness of the Western sanctions on Russia, where the economy currently seems to be doing better than was expected.

The International Monetary Fund (IMF) recently revised its forecast for this year’s contraction up from -8% to -6% and the Central Bank of Russia (CBR) is even more optimistic, having revised its forecast for this year’s contraction to a mild -5%. Moreover, Russia is currently earning more money from its energy exports than it has ever earned before – despite the shock the economy received from the sanctions.

Longer-term, however, the sanctions are expected to be more damaging, especially technological sanctions as there is little the Kremlin can do to replace Western equipment and software.

Meanwhile, the Croatian central bank expects that the country's economy will expand by a real 5.5% this year, but the growth will slow down to 2.5% next year due to the unfavourable global context.

As a consequence of the significant rise of global prices of energy resources and raw materials, consumer price inflation this year is expected to speed up to 9.4% before slowing down to 4.6% next year, the bank said.

bneGREEN: Fit for 55 – not fit for purpose
BRUEGEL: National policies to shield consumers from rising energy prices
Croatia’s PM to fire INA managers if they refuse to resign over corruption scandal