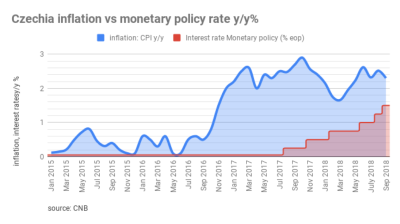 The Board of the Czech National Bank (CNB) hiked its main interest rate at the November 1 meeting as expected by the analysts earlier this week.

The fifth hike this year, the interest rate was increased again by 0.25 percentage point to 1.75%, CNB spokeswoman Marketa Fiserova said. The reason for increase in rates, according to the analysts, is the slowing domestic economic development, the growth of wages, the weakening of koruna and because inflation is running above a 2% CNB´s target.

Further increases to the interest rate is still on a table but not for long, according to Raiffeisenbank chief economist Helena Horska. “The economy will slow down significantly and the need to raise rates will fade away. Only a considerably weaker Czech crown could lift the rates again and prolong the cycle of increasing the rates to 2020,” she said to e15.cz.

In its prognosis the CNB worsened its forecast for Czech economic growth to 3.1% this year and to 3.3% for the next year, said the CNB governor Jiri Rusnok at a press conference. Previous the August forecast predicted growth at 3.2% for 2018 and 3.4% for 2019. The economists are expecting another hike in rates next year.

"In terms of economic development, the current steps of the central bank toward tightening its monetary policy are desirable. Inflation is accelerating and it should reach 3% next year. Moreover, the koruna has not strengthened as fast as expected in recent years," ING chief economist Jakub Seidler said to e15.cz

According to the real estate companies, hiking interest rates will be reflected in the market with old apartments the most. The largest mortgage banks replied to the CNB decision by raising their interest rates on mortgages. Hypotecni Banka by 0.2 percentage point from November 5, and Ceska Sporitelna with a slight increase from mid-November. Other banks are expected to follow.