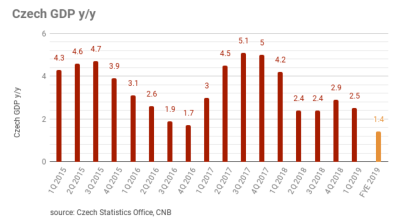 The Czech economic growth slowed to 2.5% year-on-year in the first quarter of this year from 2.6% in the 4Q18, affected mostly by lower external demand and household consumption, according to statistics data published by the Czech Statistical Office on May 15.

In quarter-on-quarter terms, GDP increased by 0.5%. Despite the slowdown and risks in development abroad, performance of the Czech economy in the 1Q19 was solid.

“Dynamic growth of the gross fixed capital formation continued. Manufacturing contributed the most to the gross value added formation; after a year, it thus has become again the dominant growth factor of the domestic economy. Most of the economic activities of services as well as construction continued to be successful,” said the Director of the National Accounts Department Vladimir Kermiet.

“Given the above-mentioned comments we know that growth in the domestic economy was driven mainly by household consumption and solid investment activity in the first quarter of this year. Already-released data confirms that services and construction performed quite well at the beginning of the year” said ING Chief Economist Jakub Seidler, adding that a strong contribution from the manufacturing segment is surprising, because according to previously published monthly figures, the manufacturing industry declined by almost 1% in quarterly terms and its annual growth stagnated in 1Q19.

According to the Office, employment accelerated by 0.5% q/q in 1Q19, by 1.4% y/y. As for the number of employed persons, its historical maximum grew again in the time series since 1993.

“This year, the domestic economy should continue to slow slightly, with consensus expectations moving to around 2.5%. However, at the moment, the risks are skewed in the direction of weaker growth, mainly due to slowing industrial production and external demand. Another risk is the escalation of trade wars and the slowdown in the Chinese economy,” Seidler added.

IMF expects the Czech economy to grow also by 2.5% in 2019 and to slow down more next year if the external environment worsens, said the IMF Chief Alasdair Scott on May 14. It is necessary to maintain high employment and productivity growth as the population ages. “The economy is doing well but is running at full capacity. Now is the time for a durable policy agenda to boost potential growth over the long term,” said Scott.

LONG READ: The Growers - a handful of countries in New Europe are coping with the coronacrisis and are still expanding
Czech utility CEZ to expand nuclear plant with state support
Movie night at the airport