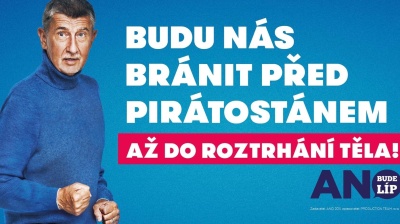 Andrej Babis' ANO is now surging in the polls amid the energy crisis, having launched an emotionally charged nationwide campaign “Times were better under Babis”. / bne IntelliNews
By Albin Sybera August 18, 2022

The Czech government will not challenge the European Commission over its refusal to reimburse it for tens of millions of euros in EU subsidies paid to opposition leader Andrej Babis's businesses that the EU says the billionaire should not have received, a cabinet meeting decided on Wednesday.

The European Commission has refused to reimburse the Czech state for EU aid paid to the  populist former premier's agro-chemical conglomerate Agrofert because he was in a conflict of interest as finance minister and then prime minister when the aid was given. Czech taxpayers could now foot the bill for the subsidies the billionaire paid to himself while in government.

"The conclusions of the EU, which show a conflict of interest and the unjustifiability of the subsidies paid to Agrofert, speak for themselves," Fiala told a press conference after the cabinet meeting. "We will indeed consistently protect the interests of the citizens of this state so that the state cannot be abused in favour of one company."

A key question now will be whether the government is prepared to sue Babis for the return of the money and how this would play out politically.

Babis' ANO is now  surging in the polls amid the energy crisis, having launched an emotionally charged nationwide campaign “Times were better under Babis”.

Babis, who has a large media empire, could also make a political comeback through a presidential race election in January. He appears to be the favourite in opinion polls but has yet to confirm his resolution to run though this could be a tactic to avoid country’s spending caps on the presidential campaigns.

The cabinet meeting on Wednesday was preceded by a heated exchange between Pirates chairman Ivan Bartos, who heads the Ministry of Regional Development primarily responsible for implementation of EU subsidy programmes in the country, and Agrofert’s representatives, who threatened legal action against the Czech state.

Babis, representatives of his ANO party and Agrofert representatives deny any wrongdoing and point out that Babis placed Agrofert into a trust which they say was sufficient under Czech  legislation, which was drawn up by a government in which Babis was finance minister.

The Czech law, which is now being amended, created a spurious distinction between the ultimate beneficiary (Babis) and the person exercising ultimate control of the company, allowing the billionaire to claim that he was not aware of what was happening inside his own company and therefore had no conflict of interest.

The State Agricultural Intervention Fund (SZIF), office responsible for the administration of agricultural subsidies in Czechia, will still have to ask for repayment of the money received by Agrofert.

According to Czech Radio, these concern some thirty EU-funded projects amounting to about CZK600mn (EUR24.5mn). Other Agrofert-linked and EU-funded projects were administered through environmental or industrial subsidy programmes.

SZIF wanted to sue the EU also to set a precedent for handling similar cases in the future. “It is a priority for SZIF to obtain a legally binding decision on how to proceed in all situations which concern use of EU funds and the position of a public figure”, Czech Radio quoted SZIF management as saying.

Czechia is also facing a legal action from the EU amounting to CZK80mn (€3.3mn) after the audit of European Commission ruled that Babis transgressed EU as well as Czech conflict of interest legislation.

The conflict of interest of the controversial billionaire, who also faces a fraud trial this autumn and a French police probe, was the reason why Babis had to step down as country’s minister of finance in 2017 during ANO’s first cabinet stint in 2014-2017 as a junior partner in a coalition with Social Democrats and the Christian Democrat party.

ANO won the election in the same year and formed its own coalition government with a weakened Social Democrats and supported by the Communists before they were ousted by Petr Fiala’s government following the tight election race last October.