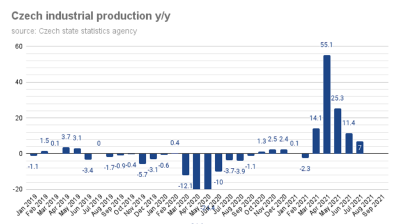 Industrial production in Czechia slowed down its year-on-year growth to 7% in July from 11.4 % in June, according to data published by the Czech Statistics Office (CSO) on September 6. The value of new orders increased by 18.9% y/y.

“The same as in the previous months, the volume of orders for industrial enterprises significantly increased. In the month-on-month comparison, the volume of new industrial orders increased already for the third time in a row and reaches the highest values in the observed time series,” said Veronika Dolezalova, Head of Industrial Statistics Unit at CSO.

In real terms, industrial production in July went up by 2.1% m/m. The output increased in most sectors, with the manufacture of basic metals going up the most by 28.1% y/y. Also manufacture of fabricated metal products and manufacture of electrical equipment grew significantly by 14.5% and 14.3% respectively.

According to the CSO, the results still reflect the coronavirus epidemic that significantly affected industry last year. "Relatively high growth rates were still partially influenced by a lower comparison basis. However, there was also an increased demand for some products of manufacturing, e.g. steel,” commented Radek Matejka, Director of the CSO's Department of Statistics on Agriculture and Forestry, Industry, Construction and Energy.

CSOB analyst Petr Dufek sees the condition of Czech industry as very favourable. “However, the scope for further growth in the sector is limited by problematic international logistics and global shortages of certain components. Overall, the industry has to cope with rapidly rising input prices (raw materials and energy), which it then translates more or less successfully into its prices,” he said.

Radomir Jac, an analyst at Generali Investments, estimates a double-digit growth of industrial production in 2021. According to him, the industry's performance will benefit from strong orders and the statistical effect of a still favourable comparison base will help in annual terms for most of 2H21. On the other hand, however, complications in the supply of raw materials and necessary components may lead to production fluctuations in the coming months and hamper overall growth, Jac said for the Czech News Agency.

The Kremlin secretly commissioned a series of focus groups to probe public attitudes about the war in Ukraine, and the findings aren’t encouraging for Russia’s president, Meduza reports.

Russia’s international reserves up by $10bn in the first week of November to $552.1bn