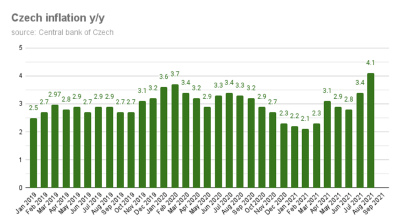 Czech inflation rose to 4.1% year-on-year in August, the highest since November 2008, up by 0.7 percentage points (pp) compared to inflation level in July and 1pp higher than the Czech National Bank’s (CNB) current forecast, driven mainly by higher prices for housing, according to data published by the Czech Statistics Office (CSO).

“By raising prices, service providers made up partly for the low or zero sales they recorded during the shutdowns and for growth in their operating expenses. For example, price growth in restaurants thus accelerated further in August. Growth in services prices is also being driven significantly by imputed rents (which have a relatively high weight in the Czech CPI) in the context of fast growth in property prices and prices in construction,” Kral added.

In the housing sector, which had the biggest impact on inflation in August, the level of rents rose by 2.5%.

"The fact that the scissors between the CNB's inflation estimate and reality widened further in August gives the central bank a compelling reason to continue tightening monetary policy. The CNB is thus almost certain to raise interest rates at the end of the month," commented UniCredit Bank analyst Patrik Rozumbersky for the Czech News Agency.

"The central bank's response will not be long in coming. The CNB may raise interest rates by 0.5pp as early as the end of September and will probably continue to raise rates in the coming months," added David Marek, chief economist at Deloitte.

According to the CNB summer forecast, inflation will increase above the upper boundary of the tolerance band around the 2% inflation target in the 2H21, due to an upswing in food price inflation, continued high core inflation and strong fuel price inflation.

“This will later be joined by renewed administered price inflation. The currently strong overall inflation pressures will start to ease gradually at the end of this year. This will be due partly to a slowdown in the currently rapid growth in import prices,” Kral noted.

Domestic price pressures are expected to go up slightly, impacted by increased consumer demand and a gradual pick-up in wage growth.

In 2022 inflation should return towards the 2% target, supported by a tightening of monetary conditions.

Inflation expected to reach 13.9% in December as war in Ukraine keeps fuelling supply-side issues in some key commodity markets.