Czech inflation rate back up to nearly 3% in July 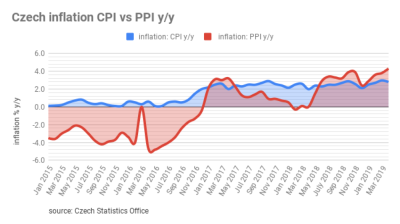 The Czech inflation was up by 0.2 percentage points (pp) month-on-month in July to a 2.9% taking it back to its May level after a slowdown in June
By bne IntelliNews August 14, 2019

The Czech inflation was up by 0.2 percentage points (pp) month-on-month in July to 2.9% taking it back to its May level after a slowdown in June, data from the Czech Statistics Office (CSO) published on August 12 showed.

Inflation was dragged up by rising housing costs, especially rents and electricity which went up by 4% and 10.4% y/y respectively.

Consumer prices increased by 0.4% m/m and according to the Head of the Consumer Price Statistics Unit (CSO) Pavla Sediva, as quoted by Novinky.cz, “an increase was mainly affected by the rise of seasonal prices of package holidays that were, if compared to June, nearly 25% higher.”

The “recreation and culture” section of consumer prices increased by 24.8% m/m. Additionally, the prices of financial services under the “miscellaneous goods and services” category rose by 2.3% m/m.

CSOB analyst Petr Dufek noted that the inflation is almost at the tolerance interval ceiling of the Czech National Bank (CNB). “Year-on-year inflation is nearly at 3% level and is still true that half of it is due to increasing housing costs. Not only real estate prices and rents, but also energy costs, water, sewer rates and other inevitable services are getting more expensive,” said Dufek, adding that as energy prices abroad show, the electricity bill will not get smaller any time soon.

“The published figures represent a slight inflationary risk to the CNB’s current forecast in the months ahead. According to the forecast, inflation will remain elevated in the upper half of the tolerance band around the CNB’s target in the second half of this year, reflecting persisting strong domestic price pressures and high growth in administered prices and food prices. Inflation will decrease at the start of next year, owing to the previous monetary policy tightening and an unwinding of the currently high growth in administered prices; it will be decreasing towards the 2% target during the year,” commented CNB’s Monetary Department Deputy Executive Director Lubos Komarek.

CNB’s updated macroeconomic forecast expects inflation to reach 2.5% this year and 2.2% in 2020, while Komercni Banka sees average inflation at 2.6% in 2019 and 2.7% next year. “The reason behind is a steep increase of consumption taxes at the beginning of 2020. It will move inflation up by 0.8pp,” said the head economist Viktor Zeisel. The price of cigarettes and hard liquor will go significantly up, and so will food prices due to drought.

US promises up to $1bn in energy infrastructure financing for Three Seas Initiative
"Westlessness" dominates the discussion at the Munich Security Conference
WeShare to enter Budapest, Prague car-sharing markets