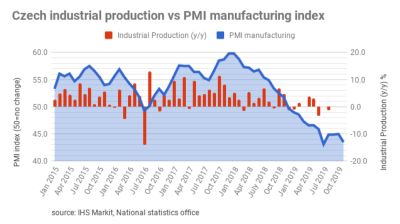 Czech manufacturing sector continued to crash in November, with IHS Manufacturing Purchasing Managers Index down to 43.5 from 45.0 in October
By Nelly Tomchikova in Prague December 3, 2019

Czech manufacturing sector continued to crash in November, with IHS Manufacturing Purchasing Managers Index down to 43.5 from 45.0 in October, driven mainly by decreasing production and new orders.

The Czech PMI index began to fall last November and since then has plunged in the steepest deterioration in operating conditions for four months and one of the worst performances since mid-2009, according to IHS Markit data released on November 1.

Any figure greater than 50.0 indicates overall improvement in the sector.

Lower new order numbers led to a further fall in workforce figures, with the rate of reduction in employment going up to the sharpest since September 2009.

According to Jones, “pessimism towards future production requirements was also mirrored in output expectations for the coming year. Sentiment fell to a fresh series low amid concerns surrounding ongoing challenges in the automotive sector.” Output among manufacturers dropped at the fastest pace since July.

Due to global economic uncertainty, particularly a slowdown in global manufacturing and trade wars, as well as ongoing difficulties in the automotive sector, the outlook for output among manufacturers has been affected by further pessimism. Sentiment fell to a series-record low as fears for the broader economy weighed on firms' expectations.

“The lower volume of new orders led to a further reduction in the workforce, at the fastest rate since September 2009. The decline in new orders had a negative impact on production expectations next year, making sentiment among producers the weakest in the time series history, i.e. since 2001,” warned Seidler.

“Nevertheless, manufacturers were still able to increase their output prices modestly in November, with the rate of charge inflation quickening despite the first reduction in cost burdens since April 2016,” Jones added.

As Seidler concluded, Czech November PMI disappointed and confirmed that the situation in the domestic industry is not changing, as some indicators abroad would suggest. “Another reason why we think the Czech central bank will keep rates unchanged at the December meeting and probably moderate its recent slightly hawkish tone.”

The Watcom shopping index finished 2019 on a high note, putting in its best result in five years after under-performing for almost the whole year.

Russia’s gross international reserves (GIR) topped $557.5bn on January 10, according to the Central Bank of Russia (CBR), surpassing the previous all-time high in 2008.

Most economies are failing to provide the conditions in which their citizens can thrive, said the World Economic Forum on releasing its new social mobility index.

Rise was driven by electronics and automotive sectors where foreign investors have developed production facilities, while light industry keeps losing ground due to the lack of workforce.