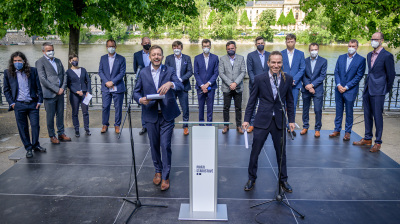 The Czech Pirate party has approved the coalition agreement signed more than a week ago between the SPOLU coalition (Civic Democrats, Christian Democrats and TOP09) that came first in the October general elections and the coalition of Pirates and STAN (Mayors and Independents).

In their internal online vote on creating a new government, a total of 82.1% of all voting Pirate members were in favour of the Pirate´s participation in a new centre-right government. For the agreement to be approved, the left liberal Pirate party needed at least 60% of all votes. All other coalition parties approved the coalition agreement last week.

"I see the joint decision to join the government as a great commitment to do the best that we can do. It is also a commitment for the members of the Pirate Party towards the voters who gave us their trust in the elections," said Pirate party leader Ivan Bartos.

“We have a clear plan for the ministries given to us and we will continue to play the role of a watchdog of democracy, that is, to ensure that the agreed boundaries of the programme are adhered to," he added. The Pirates are expected to be responsible for the ministry of regional development and digitization, the foreign ministry and the post of the minister for legislation.

"I believe people voted for us so that we could defeat [outgoing Prime Minister] Andrej Babis together. Together we will put an end to the government chaos. To prevent the rule of populists and extremists and to offer people a better future," said STAN chairman Vit Rakusan, who claimed his centrist party would have entered the new government regardless of how the Pirates would vote, although both parties had agreed to go either to the government or opposition together.

“Personally, I cannot imagine that we would fail at this stage, not join the government, not take responsibility for the future direction of our country. For our voters it would be hard to understand, if, at a time when it is possible to form a government of democratic parties with a significant majority, a political crisis were to occur,” Rakusan said before.

According to Pirate vice-chair Radek Holomcik, participation of the Pirates in the government can become a weakness for the party if the government's actions are in conflict with its agenda. “We would be also responsible for something we disagree with,” he said, referring to a rule stated in the coalition agreement that does not give any party a veto right.

That is why some members of the Pirate party said they would prefer to remain in the opposition. "I know it sounds harsh, but our only chance is to go to the opposition. If we don't act pragmatically now, we will end up like the Green party and the Social Democrats," wrote Prague Pirate Roman Kucera before voting, referring to cases during the electoral period 2006 and 2017 when smaller coalition partners did not make it to the parliament in the following elections.

The mood between the coalition members has been tense after the general election, worsened by a leaked analysis of the Pirate party which accused STAN of violating the coalition agreement when their representatives called for preference voting for their candidates. Though opinion polls had at one point put them in first place, the Pirate party plunged from 22 to just four MPs as many STAN supporters circled preferential votes for STAN representatives, which moved their candidates up the joint coalition lists, reducing the Pirate contingent to just four, compared to 33 for STAN.

"There is huge frustration within the Pirate party about how the elections turned out. A small war with the Mayors continues," political analyst Josef Mlejnek commented for Czech Television.

The new government will have 108 seats in the lower house, without the Pirate party it would have still had a majority of 104 votes.

The candidate for the new Prime Minister Petr Fiala (leader of SPOLU coalition and chair of the rightwing Civic Democrats) has been authorized by the President Milos Zeman to form the new government and present the list of new ministers two weeks ago. On November 17, he met Zeman to present the list of his Cabinet members.

Fiala will be appointed by Zeman on November 26. Zeman then wants to meet all candidates for the ministry posts in the following 10 days. Fiala said the new government could be installed in three weeks.

The health care sector will be led by the doctor and vice-chair of TOP09 Vlastimil Valek. The Finance Ministry should be headed by First Vice-Chair and head of the Civic Democrats MPs Zbynek Stanjura, the Foreign Ministry by former Pirate (anti-Russian and anti-Chinese) MP Jan Lipavsky and Education Ministry by Petr Gazdik from STAN.

After the meeting with the president, Fiala admitted that Zeman has reservations about one of the candidates. He did not want to say the name, however, it is more likely Pirate Jan Lipavsky who is a thorn in the side of pro-Russian and pro-Chinese president.

Moreover, in recent days, Lipavsky loudly questioned the move of the Czech Embassy in Israel from Tel Aviv to Jerusalem, one of the pro-Israeli and anti-Moslem president's long-term goals. He also expressed support for reassessing relations with Russia and China and criticized Russian involvement in the construction of Czech power plant Dukovany.

“In several cases I have the suspicion that the chosen ministers do not understand their ministry as they have never dealt with it, “ said the president about the incoming government. “I will be tolerant to a point that I will most likely veto one person. It is not a personal aversion as I have never seen this person,” said the president, adding that he did not want to name the person nor the ministry that should be covered by that person.

“I will have my reasons, which I will not tell Petr Fiala and which are set in stone. But in order to not slow down the whole government I will advise Petr Fiala to cover this ministry himself or to entrust a member of the government,” added the president.